COLUMBUS — Ryan Day needed a stronger whistle, especially if the sound was going to signal the start of a new era at Ohio State.

This is only a temporary gig for Day as the acting head coach, and his boss will be back to work on Monday. But even after Urban Meyer gets back, itâ€™s clear that the dynamic between his offensive coordinator and the new starting quarterback for the Buckeyes is going to be what determines the ceiling for a team chasing a national championship.

So, Day needed to be able to make some noise during warmups, and that required sending a recruiting staffer sprinting back to the locker room in search of something that could actually make some.

â€œI don’t know, they gave me a whistle, it didn’t work,â€ Day said with a smile. â€œI had to send it back. They gave me a fresh one.â€

That one echoed around the Horseshoe, and then he and Dwayne Haskins made some beautiful music together from there carving up Oregon State in a 77-31 rout on Saturday at the Horseshoe.

The evolution of the Ohio State offense was on full display, with the strong-armed, confident Haskins showing just how potent the attack can be when every corner of the field can be attacked. In his starting debut, the redshirt sophomore set school records by throwing for 300 yards and 5 touchdowns in his first career start. And while the Beavers were clearly overmatched even before kickoff thanks to the talent disparity between the programs, the Buckeyes still look like they might just be scratching the surface for what the power-spread attack can do with Haskins leading the way.

â€œNot a bad job, not a bad job,â€ Haskins said. â€œJust to be here and have this opportunity, itâ€™s a blessing. Take a deep breath, realize itâ€™s finally here, but then keep getting better and go into the next week.

â€œI feel like this whole offense is so dynamic. Not only me, but everybody else can do a lot of things this year. I feel like thereâ€™s a lot of stuff to look forward to this year.â€

Eventually thatâ€™s going to include the return of Meyer, and that only figures to provide a lift considering his reputation as a motivator and obvious track record as a three-time national champion. But based on the early returns, it at least looks like Ohio State might be wise to let Day and Haskins to keep tuning up their instruments without a whole lot of interference moving forward.

Especially once Day got a working whistle.

â€œI donâ€™t like this whistle, man,â€ Day told the staffer during warmups. â€œGo get me a new one.â€ 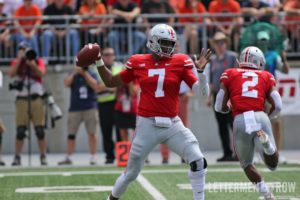 Day got his upgrade around his neck. And as hard as might be to believe given the record-setting run of J.T. Barrett, itâ€™s possible that Haskins might represent another new, improved tool to work with offensively.

Some of this, of course, might be a bit premature considering the competence of the Oregon State defense and the microscopic sample size. But it was certainly easy to watch what the Buckeyes were doing and see a lot of signs about how bright the future might be.

Itâ€™s only one game leading the program for Ryan Day, but how much doubt could there be at this point that he might one day make a worthy successor for Meyer?

That was only one start for Haskins, but he certainly showed some physical tools and command that looked like theyâ€™ll have NFL scouts drooling.

And that was only one win for the Buckeyes, but even if it came with some defensive missteps, wasnâ€™t that first half the kind of dominant display that champions are supposed to deliver even in warmup games?

â€œI don’t know about that [face of the program stuff],â€ Ryan Day said. â€œI think this is a first start for Dwayne. It was a good start. We’ll be building on it as we go.

â€œI understand what you’re saying, but I don’t want to get too far ahead of ourselves. It’s one game, and we have a long way to go.â€

Thatâ€™s undoubtedly true for Ohio State. But as far as starting points go, thereâ€™s not much it could possibly complain about with either Day or Haskins.