Those tweets, Instagram photos or Facebook posts every time an Ohio State athlete lands a top-flight internship or gets to shadow at a prestigious local business? Those aren’t by accident.

That is testimony. College sports, far too regularly, tend to be a world where student-athletes give and universities get. Ohio State has been working to change that in recent years in a number of ways, but there is no better example of it than the Real Life Wednesday program spearheaded by Ryan Stamper, the Buckeyes Director of Player Development.

Stamper, who played football for Urban Meyer at Florida, has seen that life after football isn’t always the focus it should be around the country. But the culmination of Ohio State’s year-long series, which took place Friday evening at the Horseshoe with the sixth-annual job fair, showed exactly how seriously the program treats life away from the field.

â€œIn college football right now, we spend a lot of our playerâ€™s time playing football,” Stamper said Friday from the Huntington Club inside of Ohio Stadium. “Football is very important at Ohio State, obviously, but if weâ€™re going to take their time up playing football, weâ€™ve got to give time back to prepare them for life after football.

“We have 50-plus companies here tonight and we want our guys to start networking. Whether youâ€™re a senior, junior or freshman, it doesnâ€™t matter. Weâ€™re filling up your toolbox throughout the Real Life Wednesday program, which is our speaker series. We bring in speakers to educate our players on everything. Everything youâ€™ve learned throughout the program kind of comes together at the career fair. They learn everything from Title IX, to financial literacy, how to own their own business, everything. We like to get our players internships and shadow opportunities during the summer, to put that on their resume. The goal is to get them jobs before they leave Ohio State.”

For Ohio State products like linebacker Camren Williams â€“ now a scouting assistant for the New England Patriots â€“ the chance to give back to the school by taking part in a program that helped him, is something he wouldn’t pass up. Williams spoke to the team privately before the career fair.

“Itâ€™s a blessing to be back here,” Williams said. “And a blessing to have an opportunity to speak to guys. [It’s great] just to have a chance to hear from a guy thatâ€™s been in their shoes what this is all about.”

Williams says that programs like Real Life Wednesdays are helping the current class of Buckeyes as they prepare for their next career stop, even if it is in the NFL.

“Ohio State just does a great job getting guys ready for life after college,” he said. “They play at a high-level, and itâ€™s really competitive and they work really hard. [The Patriots] know coming from a place like this, guys are going to be closer to ready. The Ohio State learning curve is a little bit shorter because of programs like this one.” 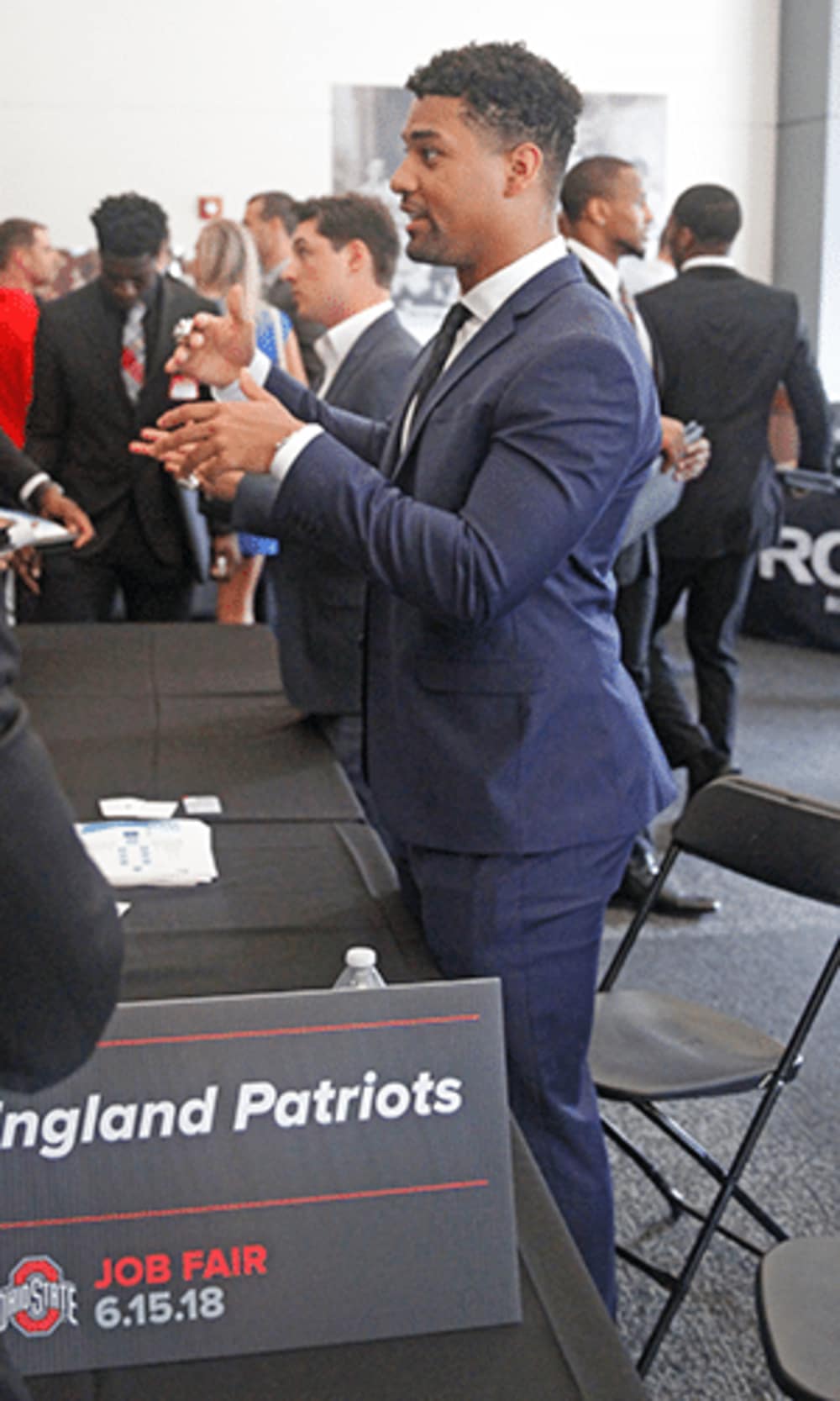 Camren Williams was in attendance for Ohio State’s job fair on Friday at the Horseshoe. (Birm/Lettermen Row)

Hundreds of athletes, trading their traditional uniforms for slacks, blazers and suits, were looking at life from a perspective that may not be what they’re used to. Mike Doss, a two-time All-American safety for Ohio State, was among the handful of former players in attendance working with current Buckeyes athletes on the big picture.

“This is a tremendous opportunity and program,” Doss, a field sales manager at DePuy Synthes, said. “Itâ€™s a great learning experience, just the exposure, getting to see a different view and vision of what their future could be.

“I am telling these kids, ‘Youâ€™re not a football player, football is something you do.’Â This kind of program shows them what they can be if theyÂ build their business mind, network and get to know people. Then you can take it to the next level, even if you do play in the NFL. At some point, youâ€™re going to transition, and this kind of program is a key cog in the wheel.”

Meyer, of course, was in attendance, looking like a proud parent while seeing the young men he’s recruited taking key steps in creating the next phase of their lives. This job fair, Real Life Wednesday, all of it, has taken on a life of its own — and it’s more than Meyer imagined it would be.

“I had a vision, but itâ€™s exceeded my vision,â€ Meyer said of its seventh anniversary. â€œIt all started when my daughters got recruited. Itâ€™s all about hope and opportunity.

â€œI think the next step is I want us to do the best we can to get secure job offers on the table for players. Thatâ€™s my goal next year. … The upper guys on my team deserve that. Weâ€™ve got some good ones.â€

The program has grown. It’s going to get bigger, too.

Success breeds success, and as more Buckeyes leave campus and find success in life because of Real Life Wednesday and events like it, the more players will return to contribute to its future.

“It’s even bigger now than when I was being recruited,” fifth-year senior Parris Campbell said. “Coach has taken that step and is telling people, ‘Weâ€™re not going to use your son, weâ€™re going to have jobs for them, theyâ€™re not just here for football.’

“Weâ€™re successful at football, of course, but weâ€™re setting ourselves up for something bigger.â€

The proof is in the pudding, according to Stamper.

“Coach Meyer talks about testimony and theory all the time,” he said. “Theory is whatâ€™s supposed to happen, testimony is what actually happens. Testimony is guys like Camren Williams, Adam Griffin, Guy Ferrelli, players who sat through Real Life Wednesdays and got their careers and learned the tools to be successful.

“Now theyâ€™re back, giving back. When you have that kind of testimony, why wouldnâ€™t you want to go through this program? It works.”