The summer offseason is in full swing, and Lettermen Row is trying to survive it with our annual Position Week breakdowns. By the time all nine units at Ohio State have been covered, training camp and media days will nearly have arrived â€” and the return of football in the Horseshoe will be just around the corner. Letâ€™s continue Wide Receivers Week at Lettermen Row with a preview of what the Buckeyes depth chart could look like.

Since taking over at his post in 2018, Hartline has managed to land the top receiver in two different recruiting classes and a pair of other five-star prospects. Every receiver he has recruited has been a top-100 player in the country. And he doesn’t show any signs of slowing down for the future.

The current edition of the wide receivers unit is as talented as it ever has been for the Buckeyes. They know what is assembled in that room and what can be accomplished in the offense if they get those talented weapons the ball.

â€œWe have a really good room there,â€ Ohio State coach Ryan Day said. â€œWe have some really good talent. But we need to bump that talent. Thatâ€™s a really huge area that we have to focus on here, because youâ€™re going to have a young quarterback. But those young receivers are going to have to really step up now.â€

Ohio State has the talent to be the best wide receivers unit in America. But some of it is unproven at the college level. With a mix of the best-two returning receivers in the sport and young, skilled options after them, how will the depth chart shake out come September? Lettermen Row is projecting what the Buckeyes will do at wide receiver this fall.

Chris Olave:Â Ohio State is getting more of Chris Olave than it likely expected to receive. Olave decided to come back for another season, passing on the NFL draft after his junior year for another chance at a national title. He has already cracked one preseason All-America team, and he’ll be listed as the top returning wide receiver in the country no matter where the list is coming from. He has a chance to enhance his leadership in the wide receiver room for the Buckeyes — and become the program’s first wide receiver since 2007 to be taken in the first round of the NFL draft. 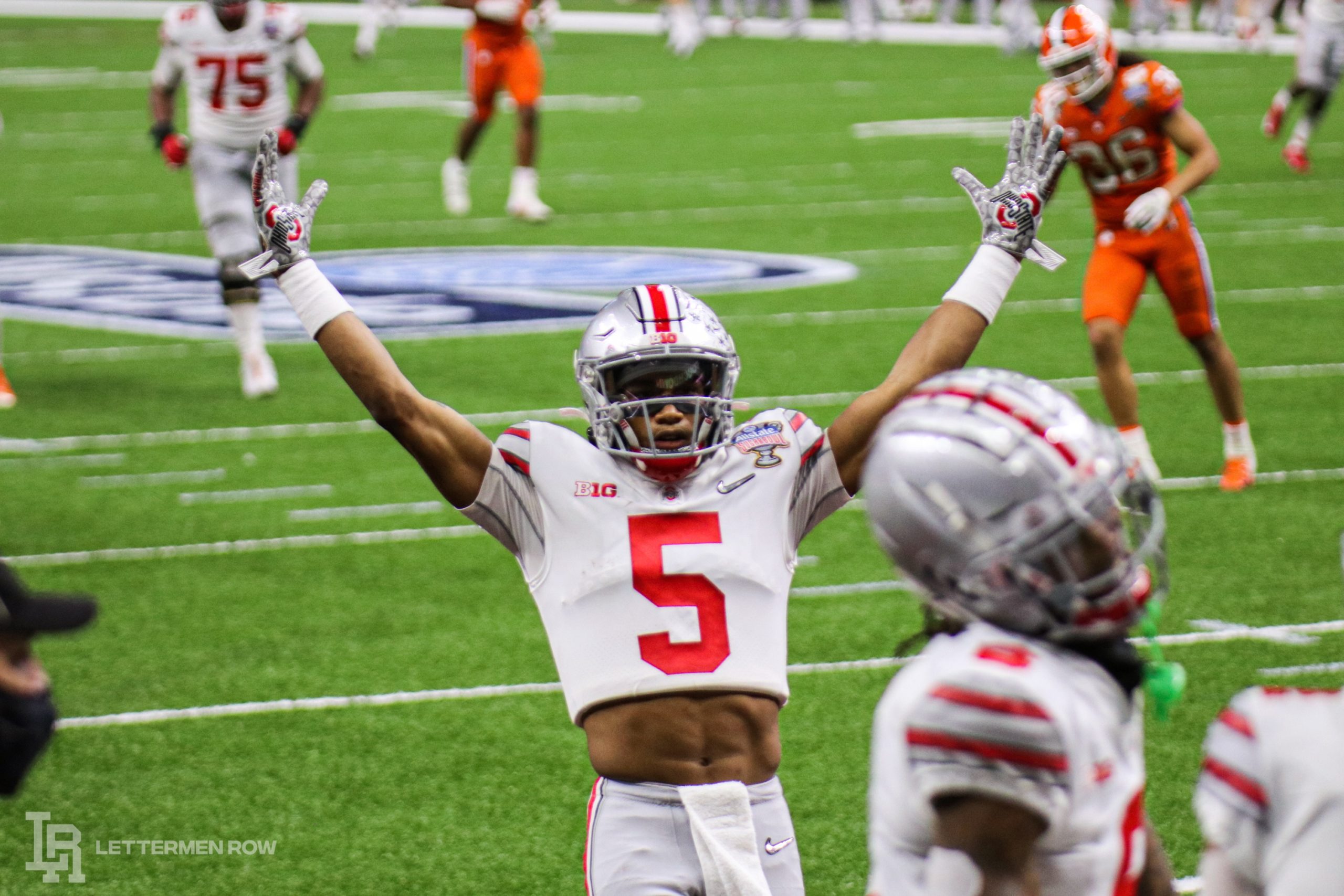 Ohio State wide receiver Garrett Wilson is back to dominate for another season. (Birm/Lettermen Row)

Garrett Wilson:Â If Olave is the best returning receiver in the country, Garrett Wilson is the second-best. Entering his third season in the Buckeyes program, the former five-star was unstoppable in nearly every game last year. He has already shown an ability to play outside, like he did as a freshman, and in the slot spot, where he terrorized defenses in the eight-game season last year. With another productive season full of show-stopping plays, Wilson has a chance to be an All-American and a first-round pick next spring, just like Olave.

Jaxon Smith-Njigba:Â Just a few minutes into his collegiate career, Jaxon Smith-Njigba made a highlight touchdown catch that will be hard to top. After a flashy breakout season littered with glimpses of his potential, Smith-Njigba has a chance to take over the slot receiver role for the Buckeyes and become a superstar. If he lines up with Wilson and Olave, it’ll be hard to cover him as attention is paid to the two All-America candidates. Smith-Njigba showed he has the ability to make incredible plays last year. As a potential starter this season, he can break out and begin to reach his ultra-high ceiling in the Ohio State offense.

In the mix for Buckeyes

Julian Fleming: After coming to Ohio State as the top receiver in his class, former five-star Julian Fleming showed flashes of his potential last season. He had his best game in the Big Ten title win over Northwestern as he filled in for Chris Olave. He showed he can play at a high level when he’s healthy. But he has struggled through injury, though a limited spring to recover should have him on track for training camp. Once fully healthy, Fleming will enter the mix and become a factor in the Ohio State offense. He is one of the most talented players on the Buckeyes roster. It’s not a matter of ifÂ he breaks out, it’s a matter ofÂ whenÂ he will for Ohio State. It might come this fall. 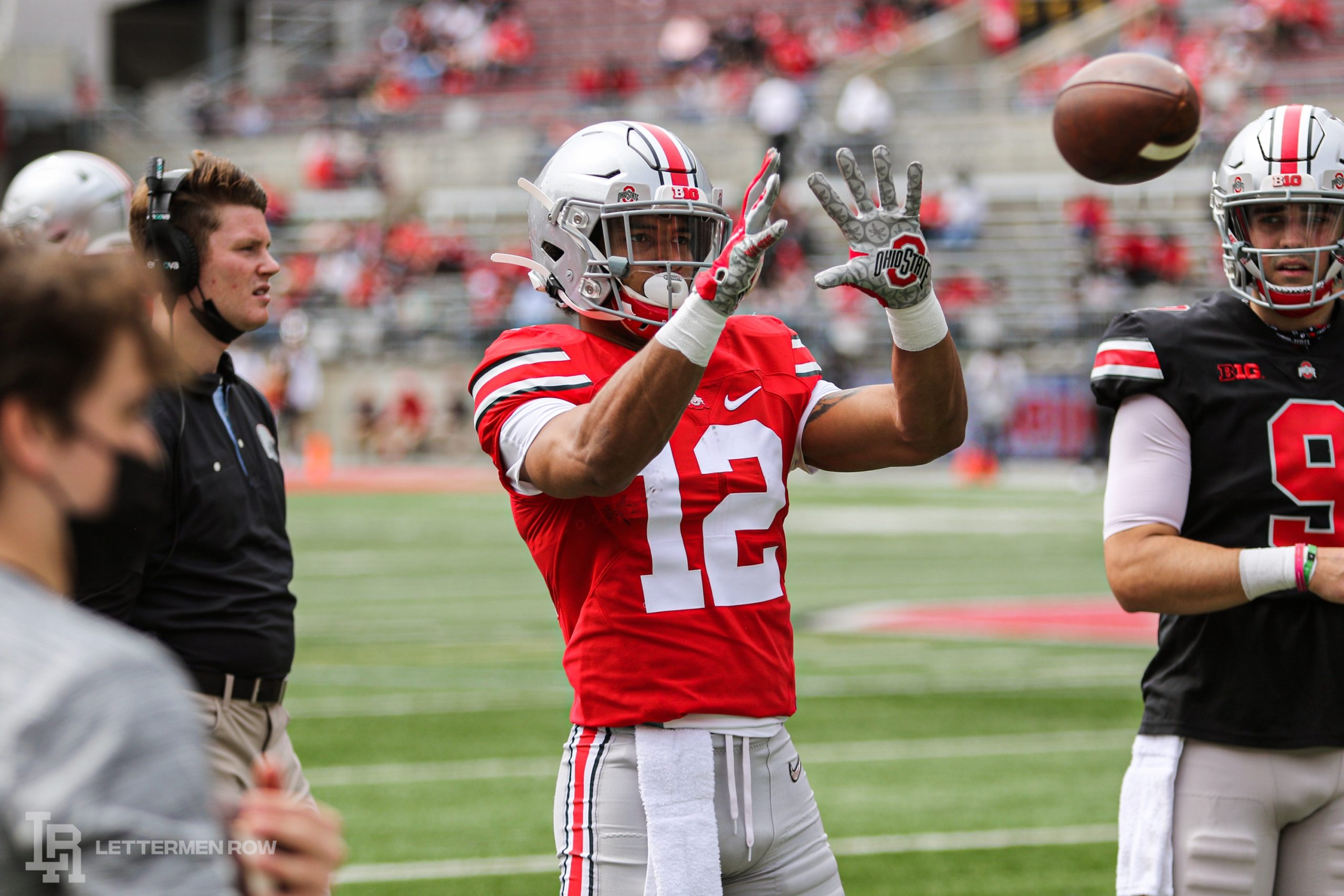 Emeka Egbuka:Â The No. 1 wide receiver in the 2021 class, Egbuka arrived at Ohio State in January with high expectations. So far, so good. Egbuka was one of the stars of the spring game, catching seven passes on nine targets for 123 yards during his first action inside the Horseshoe. Egbuka has rare skills for the Buckeyes to build upon, and he has an ability to play in the slot, much like Smith-Njigba. Ohio State has a talented room, but it certainly is a young room. Egbuka will be a part of the plans in the offense, and he’ll have a role early in his Buckeyes career. And he might just be a surprise breakout candidate among the other talented receivers.

Marvin Harrison Jr.:Â The son of a Pro Football Hall of Famer, Marvin Harrison Jr. arrived at Ohio State in January with high expectations. He is already exceeding what those expectations were for his first season on campus. Harrison began turning heads instantly in spring camp and has been working to continue getting better alongside fellow 2021 recruit and his former high school quarterback, Kyle McCord. Harrison will certainly have a role in the Buckeyes offense. How big of a role? That’s what is left to be seen. 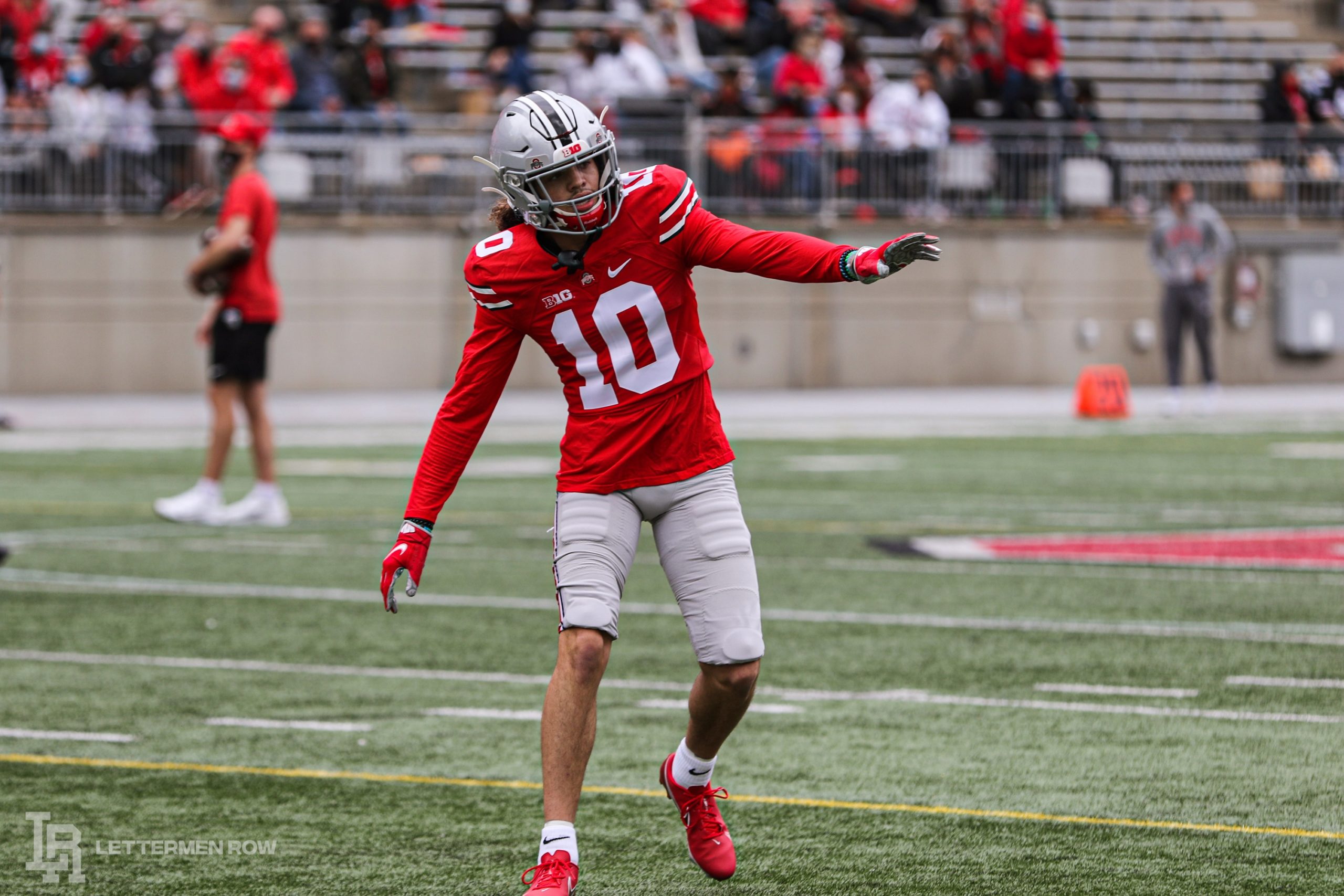 Jayden Ballard made plays during the spring game. (Birm/Lettermen Row)

Jayden Ballard:Â Another top-100 player from the 2021 recruiting class, Jayden Ballard hasn’t been talked about as much as Harrison Jr. and Egbuka since enrolling early. He has been quietly gaining steam and showing he can play early in his Ohio State career. Ballard made plenty of highlight catches during his high school career at Massillon, and he’ll bring that ability to the wide receiver room. Can he surprise and take a leap toward playing time this fall?