PASADENA, Calif — Tate Martell has no plans to transfer. And he absolutely expects to be the next starting quarterback at Ohio State.

The lightning-rod backup drew by far the largest crowd at media day ahead of the Rose Bowl on Sunday morning. And he addressed his future and shot down speculation about leaving the program amid rumors hinting that Georgia freshman quarterback Justin Fields will be transferring to Ohio State.

“Why would I leave for someone who hasn’t put a single second into this program yet,” Martell said. “I’ve put two years of working my ass off for something that I’ve been waiting for and dreaming of having my whole life.

“There’s no doubt, I know I wasn’t ready my freshman year, but two years of waiting around and having to compete with guys like Dwayne Haskins, Joe Burrow and J.T. Barrett, I know that I’m an elite quarterback. When I get myÂ chance I will run the offense at a very high level.

“I think [the transfer rumors] because everybody has seen what I accomplished in high school and figured that I would want to get on the field, which I do. Thereâ€™s no doubt I want to get on the field. But all that stuff is in the past. I want to play for Ohio State. Itâ€™s been my dream since I was born to play for Ohio State, and Iâ€™m not just going to walk away from something that Iâ€™ve put so much time into and thereâ€™s not a chance that I wonâ€™t go out there and compete and fight for my job.” 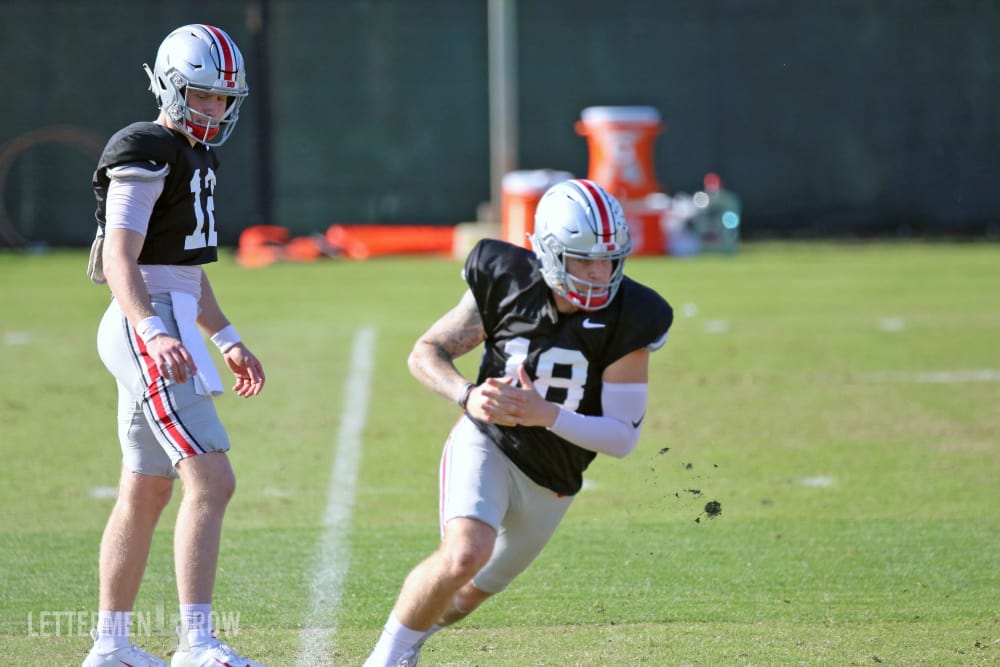 Martell emphasized that even if Fields transfers to join the Buckeyes, he’s not going to stop fighting for a job he feels he’s earned. He fully expects to start for Ohio State whenever Dwayne Haskins does head off to the NFL, which is widely expected to happen after the Rose Bowl.

He did admit, however, that he’s wondered about his future because of the depth that’s surrounded around him in Columbus. Watching the success former quarterback Joe Burrow had when he left Ohio State and instantly became the starter at LSU only stoked his fire.

“You always have to think about how timing plays out and what could happen,” Martell said. “So, there have been times where Iâ€™ve had to look at it like, â€˜How long am I going to actually sit here and wait around before I get my chance?â€™ At the end of the day, the reason Iâ€™ve never left this school after everything Iâ€™ve done and all the time Iâ€™ve put in is because I love my teammates.

“Iâ€™m going to be honest, thatâ€™s the only thing thatâ€™s really kept me here at this point. I love my boys, all the guys in my class, Iâ€™d do anything for them. They know that, the whole team knows that. Because there are a ton of other schools I could be starting for right now. Look at what Joe did. â€¦ Itâ€™s kind of crazy — it shows what we had and still have in our quarterback room.”

Martell’s entire Ohio State career has been littered with rumors of his own potential transfer, a byproduct of his high-profile recruitment as the three-time national championship-winning quarterback at Las Vegas powerhouse Bishop Gorman High School. Martell said those rumors are the result of people having the wrong idea about who he is as a person because of the television series “QB1” which featured Martell and — ironically — Georgia quarterback Jake Fromm.

“That’s what the media has kind of set on me right now,” Martell told Lettermen Row. “I can tell you, from two years of being in this program, that’s not who I am. If you watched my show in high school, that makes sense to you, but that was a whole part of the show itself. In two years, I’ve changed a lot as a person.”

But the plans for the future for Tate Martell? Those are unchanged.