You are using an out of date browser. It may not display this or other websites correctly.
You should upgrade or use an alternative browser.

Big time talent here Kimber especially. He was the odds on favorite to take one of the starting CB spots. He got hurt in spring had surgery and missed the whole season. Speed played in a lot of games. These two would be a nice 1-2 punch veterans with playoff experience. How often can you get a pair of starters? 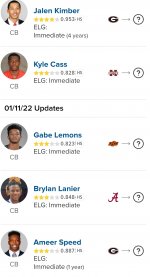 Rather have Kimber if he's healthy, but we got a lot of CB's to look at lol
Reactions: conquist and HRPickenstuff

Actually, Kimber attempted to initially rehab without the surgery and reinjured the shoulder twice. He did play again against UAB but injured it again and decided to have surgery at that point. That ended his season.

He's fast but underweight from a strength perspective. Ameer has his degree. I think hes got just one year of eligibility left.
Reactions: conquist and HRPickenstuff
G

I think we might be filled up in this position group unless we start purging more kids. I think they maybe making an exception for Okie transfer Latrell McCutchin. i think he maybe part of the Kids wanting to possibly move with Caleb! Coach Donte has done a great job of recruiting in this position group!
Fight On!
Reactions: conquist

Add Latavious Brini...star position....1 year of eligibility left. He played a lot this season but got replaced late by William Poole.

Is Speed his real name? I hope he's fast