In the interest of taking our minds off yesterday's heartbreaker, I thought I'd give you an update on how last year's senior class is coming along in their new basketball homes. [caption id="" align="alignnone" width="208" caption="Do somethin"] 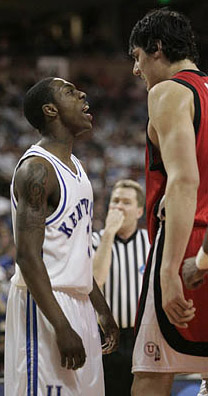 [/caption] Ramel "Smooth" Bradley is currently playing for Cedevita Zagrab, a team in the Croatian Basketball Federation, and playing very well. The former Cat is averaging around 20 ppg to go along with over 3.5 assists in 11 games this season, which include nine league games and two in what is probably some crazy European tournament. No word yet on the average number of times per game Smooth gives the crowd the diamond, but if he can get the blue hairs in Rupp to throw up the rock, getting the softies in the former Yugoslav Republic to get in on the act should be a piece of cake. Ramel seems to be playing well and his team looks to be in contention for the new box of 1985 audio tapes and windbreaker suits that they give to each of the players on the championship team.

Joe Crawford is playing domestic ball and also making us proud. He currently plays for the NBADL's L.A. D-Fenders, who play tough enough defense they didn't even let that other 'e' into the word. Suffocating, to say the least. Anyway, Joe is averaging 20.2 ppg, good for 10th in the league in scoring. (Our boy Erik Daniels is 5th with 21 ppg. No stats on how many baskets he's made while in the process of falling down.) Joe adds 3 assists and 4.5 rebounds to go with his scoring output, as it looks like the Lakers' last cut is making a case to find his way into the league sooner rather than later. Now you can sleep easy knowing that your former Wildcats are safe, sound, and productive in their new dribbling domains. Back to your day, everyone. Also, screw you Edgar Sosa!