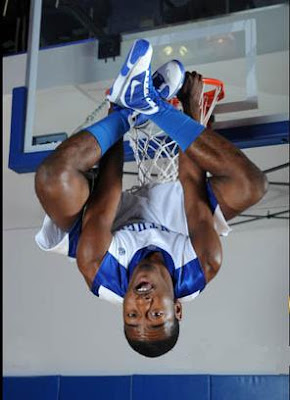 Join me in wishing John Wall a happy 22nd birthday today. On September 6th, 1990, John Wall entered the world. On May 19th, 2009, John Wall entered the world of Kentucky basketball. And let's be honest, that world has been so much better ever since. When John Calipari came on board with Kentucky, everyone knew things were about to change in the Bluegrass. The days of finding a silver-lining in getting a chance to host an NIT game in historic Memorial Coliseum were gone. The days of searching YouTube for obscure videos of recruits who might be "sleepers," yet somehow managed to slip under the radar of every other major college basketball program were long gone as well. Bigger and better things were to come, and John Calipari was going to lead us back to the Promise Land. But first, he had to rope in the most talked about recruit in the 2009 class-- the next big thing in the world of basketball. DeMarcus Cousins was a big-time get, along with Eric Bledsoe and Darnell Dodson (at least at the time). John Wall was different though. John Wall was not only going to be the type of player to bring hype to the program the moment he let the words "I'm going to attend _____" slip from his mouth. John Wall was going to become a househould name for years to come. Stardom was his destiny. On May 19, 2009, John Wall selected the University of Kentucky as his launching pad into the spotlight. Not only was he going to bring star power and the "cool" factor back to Kentucky, but the home of the most basketball-obsessed fans in the world, one of the few meccas of college basketball that had been anxiously awaiting a return to its rightful place in the pecking order-- was ready to combine forces with Wall for a perfect match of talent, tradition and exposure. John Wall found a way to help reignite an old flame at Kentucky, bringing the best of the new world face-to-face with one of the traditionally great programs. Neither John Wall nor the University of Kentucky had to break in order to make room for the other. John Wall embraced everything about Kentucky, and Kentucky embraced everything about John Wall.  Let's take a moment to look back to May 19, 2009 on KSR when John Wall committed to the University of Kentucky. Many of the big named basketball gurus, announcers, writers, etc. had bold predictions of the future of Kentucky basketball with the landing of John Wall. Most of them were quite accurate. Gary Parrish:

“Seriously, this is not going to stop or even slow down. This year, it’s John Wall. Next year, it’s Brandon Knight. And if you think I’m being hyperbolic, then consider this question: If Calipari could in various years lure the top prospect from Detroit (Chris Douglas-Roberts), Chicago (Derrick Rose) and Philadelphia (Tyreke Evans) to a C-USA school in the south with just a handful of nationally televised games each season, how difficult do you think it will be for him to do that and more at an SEC school that could routinely lead the country in network appearances? Answer: Not very difficult at all. And Tuesday’s commitment of the nation’s top point guard should serve as another reminder. Or better yet, a warning.”

“Calipari already had Rivals.com’s No. 1 recruiting class for 2009-10 prior to Wall’s commitment, but with him Kentucky appears to assembled one of the best recruiting classes of the decade…Multiple NBA sources indicated that Wall would have been a highly coveted pick even without a year of college experience. ‘He would have gone in the top three this year, guaranteed,’ one NBA executive told SI.com.”

"John Wall’s commitment certainly means that we will be a national championship contender next year. With the talent UK has coming back and the new players, only Kansas and Michigan State are really in the Cats’ ballpark. But the Wall commitment and the events of the last eight weeks have importance beyond next year. Calipari has shown that he will get the best of the best and will be the FORCE in college basketball for the next decade. Gone are the days of below average recruits, reaches for kids still going through puberty or late Spring signing periods with seasons hanging on the balance. Beginning are stacked classes of kids who have five star talent and a desire to come and play for the best. Simply put Kentucky will be Kentucky and everyone else just has to accept that fact. Over the last few weeks, my friends in the national media have given me a hard time about my homer ways and my notion of what is to come for Kentucky. I dont care. Calipari is about to embark Kentucky on another stretch of dominance that will place it firmly at the top of the college basketball heap. Today it was Wall, tomorrow it will be someone else, but one theme will continue. The Cats are going to win and win big. I get asked how many championships and Final Fours Calipari will make and that much is uncertain. But here is what is certain. The next decade will be Kentucky basketball at its finest and fans need to get strapped in for what should be another ride of a lifetime."

"Ladies and gentlemen, welcome to a new chapter of Kentucky basketball.  When John Wall announces later this afternoon (2 pm to be exact) that he will be suiting up for our beloved Wildcats, it will put an emphatic exclamation point on the greatest recruiting performance in the history of college basketball and usher in what could be one of the most dominating runs since John Wooden paced the sidelines."

Happy birthday, and thanks again.