Is A Homecoming In Store for Bud Dupree?

While Kentucky basketball has become a pipeline to the first round of the NBA things on the turf have been just the opposite . In the past 30 years of Kentucky Football only 3 players have gone on to be drafted in the first round of the NFL draft. That's George Adams, running back, selected with the 18th pick in 1985. Tim Couch in 1999, drafted first to the Cleveland Browns. And in 2003 Dewayne Robertson was drafted 4th overall to the Jets. This Thursday night Bud Dupree looks to become the fourth player to be drafted in the first round and it could end up bringing his talent full circle. 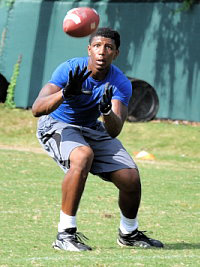 That kid above is a young Alvin "Bud" Dupree who attended high school at one Wilkinson County, GA which is just two hours south of Atlanta. The Atlanta Falcons hold the 8th pick in this Thursday's draft and they are in desperate need of someone who can pass rush. Seems like a match made in heaven. A career back home is exactly where Charley Casserly of NFL.com has Bud Starting out this summer. Two other pundits have him 6th to the jets and one has him 13th to the Saints. Regardless of where he ends up this Thursday, seeing a Cat go in the top 32 has been a rare occurrence in Lexington and is something deserving of special recognition. Way to go Bud! Keep making the Big Blue Nation proud!