UK Athletics[/caption] The top-ranked Crimson Tide have not seen a team like Kentucky in 2020. The Wildcats' offense and a COVID-19 scheduling adjustment have put Nick Saban on high alert. "I think Mark Stoops has done a really good job at Kentucky," Saban said Monday afternoon. "They've got a good team. They have 15 starters coming back from last year’s team. They’re, I think, first in pass defense in the SEC. They’re second in rushing. They run the ball very effectively. They got really good running backs. Their quarterbacks are very athletic and can run. They create a lot of quarterback run issues for you. No. 6 (Josh) Ali is a really good receiver, very good return man as well. They have really good specialists. "So all around this is a really good team. They’ve been in every game this year, and they could have won a couple of more just as easily as not. So this is a team that’s a little different in terms of what we’ve seen in the past. We've got to be able to stop the run and be able to win the line of scrimmage on both sides of the ball because that’s going to be a real key to the game." You heard him right, folks. Nick Saban is scared of Kentucky's offense. All joking and poking the bear aside, Alabama's defense is not the usual Alabama defense. The Crimson Tide rank eighth in the SEC in pass defense, fifth in total defense and fourth in rush defense. If you prefer analytics, ESPN's SP+ ranks Alabama's defense 12th nationally in efficiency. It's good, but not up to the typically elite standard. The Crimson Tide are also inexperienced against an attack that heavily features designed quarterback runs. Kellen Mond only rushed it eight times and most of the 40 yards Matt Corral picked up on the ground were the result of scrambles. Kentucky will travel to Tuscaloosa a week after one of its most successful days using designed quarterback runs all season. "I think when the quarterback can run, it makes it like Wildcat. There's always an extra gap because you don't really account for the quarterback in most basic things that you do on defense. They do a good job with formations. They make you make a lot of adjustments and you gotta stay gap sound in everything you do and you gotta have enough guys in the box to account for the quarterback," Saban said. "I don't think we've played anyone this year that the quarterback actually does, or has as many quarterback runs as these guys are capable of. Some of it is as simple pulling the ball in the zone read, which you gotta be very disciplined. Whoever's got the quarterback has to stay on the quarterback. This is a game with requires a lot of discipline from all the players. Everybody's got to do their job. It's a little bit like when you play option football. Somebody's got the dive. Somebody's got the pitch. Even though they're not really an option team, the same principles are involved in terms of how you stop their runs, quarterbacks runs, RPOs and their passing game." On top of the new QB run challenge, Alabama is in a scenario Saban's never experienced before in his coaching career. The postponed LSU game forced the Crimson Tide to sit on the sideline for two consecutive Saturdays. They may be fresh physically, but could be rusty mentally. "We were ready to play. I think the players want to play," Saban said. "If we were in a regular season this would've been the 11th game of the season. We practiced as much as if we were in the 11th week of the season, so I think physically we've been able to take care of our players. I think psychologically it's a real challenge for them to stay focused on the things they need to do to continue to improve and play at a high level, especially when we're basically halfway through the season." If Alabama loses their focus and Terry Wilson has a career day, Kentucky could play in the 3.3% at Bryant-Denny Stadium. 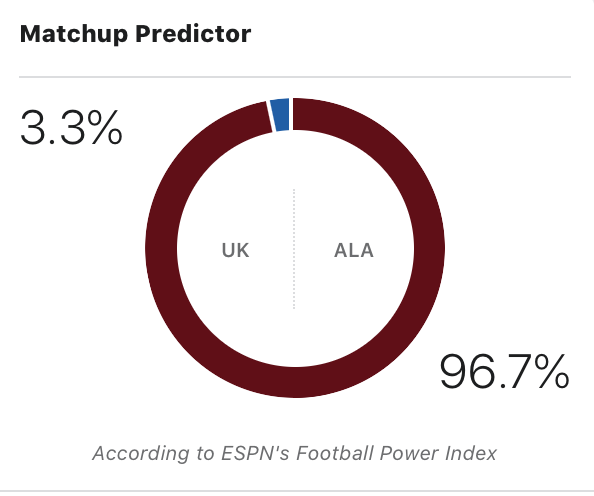