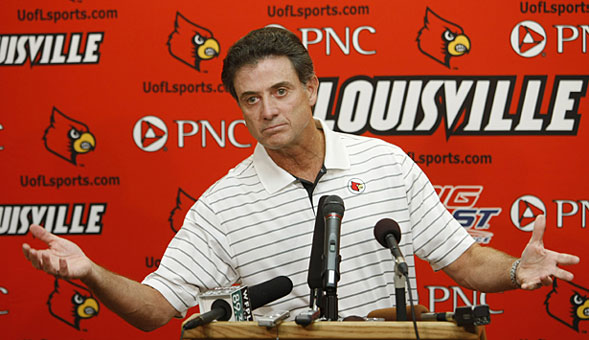 "He's the first guy I've seen that reminds me of Charles Barkley since I've been coaching," Pitino said. "They are both undersized, both can really rebound the ball. Chane has tree-trunk legs, but is extremely light on his feet."

For those keeping score at home, this is not the first time Rick Pitino has linked one of his joe's with a pro, or made an over the top statement about one of his players. Pitino already compared Chane Behanan to his greatest recruit of all-time while at Kentucky, Jamal Mashburn. Pitino also once called Mike Marra the greatest pure shooter he had ever seen. We all know how that one has panned out thus far... Since Rick Pitino is so good at predicting the future and foreseeing potential, I thought we would invite him to give us a hand in previewing the upcoming Louisville/Kentucky football game this afternoon. KSR: How excited are you for the Governor's Cup match-up this afternoon? Pitino: I've tried to make it a rule of thumb these days not to get excited too early for things...   KSR: Understandable. Do you anticipate a close game? Pitino: Without question this will be one of the greatest college football games of all time. Remember the USC/Texas thriller when Vince Young ran into the history books in overtime for the national championship? Remember when Boise State pulled the "Statue of Liberty" play out of the playbook in the waning minutes of the game to upset Oklahoma? Remember the movie Remember the Titans? Remember the LSU hail mary? This game will actually incorporate all of those things. The game will be decided in overtime. The Statue of Liberty play will seal the deal and Rick Minter will propose to his girlfriend following the game...mostly so it's no longer considered a recruiting violation when he takes her to dinner with recruits. Joker Phillips and Charlie Strong will unite together to end the segregation and hate between Lexington and Louisville, mainly through the art of pre-game dancing and yelling "Waddy Peytona! Strong Side!" This will be the greatest game of all-time. I can just feel it...   Do either of these teams have a little-known player who you expect to make a big impact on the game? There's a kid who is an equipment manager for Louisville who reminds me a lot of  a story I once heard. The kid can't be more than 5'6. Red hair, obviously. Twice now I have been walking past Papa John's Cardinal Stadium and have had to stop for a moment to tighten the straps on my bullet proof vest. Both times I have been stopped just long enough to notice the kid losing his eyes over practice from the tunnels. Apparently he started off his career at JCC before finally getting admitted to Louisville. I bet the kid's Dad was really proud. He might have even stood up in front of his entire work force when the kid told him the news of his acceptance. That's just a guess though. I wouldn't be surprised if they let that little guy lead the team onto the field on Sunday.    What did you think of Kentucky's decision to name Maxwell Smith the starting quarterback on Sunday? Brilliant decision. That kid reminds me a lot of Andrew Luck.    Andrew Luck? That's a pretty bold statement. He was the top pick in the NFL Draft. I just call them like I see them. If Max had a more prominent forehead, I would have gone with Peyton Manning. I've seen him scratch a dog behind the ears, otherwise I would have gone with Michael Vick.    Louisville should enjoy an advantage, having the game played in their home stadium, Papa John's Cardinal Stadium. What are your thoughts on the venue? Papa John's Cardinal Stadium is one of the premier college football venues in the nation. The Dallas Cowboys modeled their new stadium with our stadium in mind. Without question we could house an NFL team here in Papa John's Cardinal Stadium. I would compare PJCS with an NFL stadium, for sure.    Really? NFL? What about your basketball arena? Would you compare the Yum Center to an arena from the NBA? No. And how dare you ask me this question the day Keanu Reeves was born?   What do you think will be the deciding factor as far as who wins the game on Sunday? I really don't like to make decisions. Can I just give you a couple thousand dollars to make the decision yourself? I'm better at comparisons.    Fair enough. Let's go with a few quick-hitters, okay? I'll say a name, you make the comparison.  Quick-hitters? Okay, works for me.    Teddy Bridgewater? A combination of Michael Vick, Drew Brees, Jesus and Secretariat.    La'Rod King? Calvin Johnson.    Charlie Strong? Madden. He'll have a video game named after him someday.    Louisville's kickers? They actually are probably going to be terrible. If I'm throwing out comparisons, I'd probably go with Bill Gramatica... Mark Krebs? A young Al Pacino. Have you seen "Thunderstruck?"   That's a wrap. Thanks, Rick.