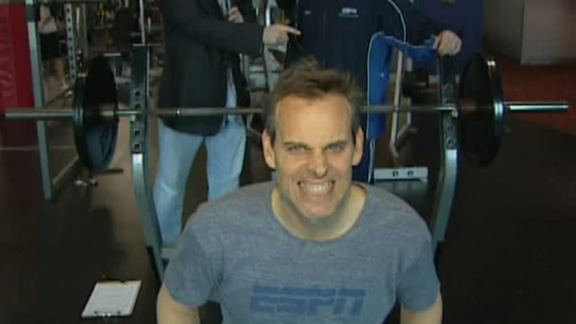 In 1927, CBS made its first radio broadcast out of Chicago, Illinois under the banner of the "United Independent Broadcasters".  In the 83 years since, they've established themselve as a media power through a multimedia reign highlighted by last year's CBS College Basketball Road Trip featuring the KSR crew.  Now, all of that greatness is in jeopardy as The Hollywood Reporter is reporting that CBS has bought the rights to Colin Cowherd's life story and a sitcom based around Cowherd is in the works.  With Colin's widespread appeal, the dog from Legally Blonde signed on to play the title role and the glowing reviews for that Kornheiser show featuring George from Seinfeld, most beleive long-term success is imminent.  But, I've talked with my super-important contacts at CBS and they've indicated they're having some issues coming up with an appropriate title and asked for your help.  We've already taken to Twitter with suggestions, tagging them with #CowherdSitcomNames and this is what you've come up with: $#*! That Douche Says 8 Simple Rules For Pretending You Know Anything About Sports Saved By Michelle Just Shoot Him Clueless Rules of Enragement Everybody Hates Colin Family Matters....when you're drafting a point guard My Big Fat Obnoxious Mouth Sons of Malarkey Colin Loves Colin Lost Mad Men The Loathe Boat Tool Time Are there any more?