A day much like tomorrow will be, in that Louisville will come into a nationally televised game, in the Top 25, looking to defend the Governor’s Cup on their home field from an unranked Kentucky team coming off of a losing season. Unfortunately for our brethren with the flattened hats and beards of minute width, that last time ended very poorly for them.

Louisville was ranked #17 to start the season, and were coming off an 11-2 season and a Liberty Bowl win over BYU in 2001. Dave Ragone was the Quarterback and Senior leader, back-to-back C-USA Player of the Year, and preseason Heisman candidate. Louisville also had 3 preseason All-Americans coming into the season with Ragone, Dewayne White, and Anthony Floyd. Kentucky on the other hand, was coming off a 2-9 season in the first year under Guy Morriss, who had inherited a program on probation, and wasn’t eligible for postseason play until the following season. Naturally, the odds were not in Kentucky’s favor, as the oddsmakers saw them as 13-point underdogs to the Cardinals. 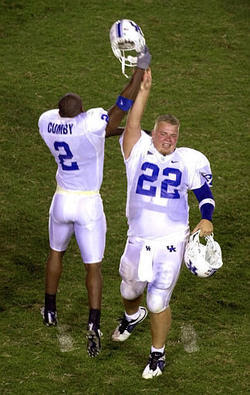 But instead, Ragone’s Heisman campaign and “The Ville’s” BCS berth died as UK’s defensive line dominated the game, harassing Ragone for 60 minutes. By the final buzzer, Ragone had been sacked three times, and had thrown for only 193 yards with 1TD and 1INT. Jared Lorenzen threw for 196 yards and led UK on 2 field goal drives in the 4th quarter after falling behind 17-16, and the defense held strong the rest of the way in a 22-17 victory. Louisville would struggle to a 7-6 season that ended with an embarrassing loss to Marshall in the GMAC Bowl, and Kentucky used to the win as a spring board to a 4-0 start, and finished 7-5 on the season although NCAA Probation held them out of a bowl game.