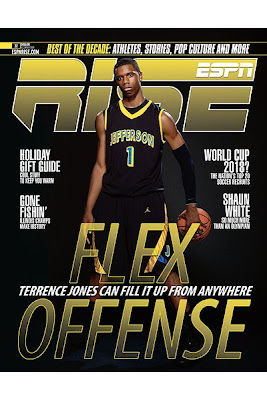 There are a lot of similarities between Jones announcement and the announcement of Harrison Barnes a few months ago. In that situation there was a lot of confidence coming from both the UNC group and the Duke group. Of course, in the end, the long perceived favorite, Duke, lost out and Barnes chose UNC. There were a lot of rumors of Coach K's reaction to the announcement but it's safe to say that he was surprised and disappointed at the decision and wasn't 100% sure of Barnes' decision all the way up to the time it was announced. Jones will probably cause the same reactions. I've heard that both Washington and Kentucky are pretty confident with where they sit but no one is sure at this point and no one is going to feel 100% confident at announcement time. Kansas has came in a little late and they don't seem to be in as good a spot at UK or UW at this point but, much like Roy Williams and UNC, you can't count out a talented group of recruiters like the ones that KU has on staff, no matter how disadvantaged they are from the outset. From what I've heard about the decision, I wouldn't be shocked if he chose Washington or Kentucky. I would be pretty surprised by a decision for anyone else, but not shocked. There just isn't very many leaks coming out of Jones' group and therefore the prediction is pretty much just a somewhat informed guess. When I try to describe Jones decision, it always comes down to whether he wants to stay close to home at Washington with a school and staff he is comfortable with or go cross-country to UK where he is equally comfortable with the staff but really feels like he could flourish in the offensive scheme with talented teammates. The decision is a huge one for UK's 2010 success. Jones would take an arguable great class to the point of being a definite great class. Not only does he add another 5 star to the mix, he fills probably the only true gaping hole in Calipari's 2010 class, a versatile power forward who can handle the ball extremely well for his size. Regardless of where Jones goes, the future is bright for UK but you better believe that adding Jones to this class will take the outlook for the 2010 season to near 2009 heights and would make the possibilities for the 2011 class unbelievable. So tune in to the live blog here at 6:00 pm and also watch the press conference as it occurs here.