COLUMBUS — Ohio State isn’t opposed to taking on a project or two when it sees potential, and it’s hard to ignore the upside packed inside the enormous frame of Dawand Jones.

Maybe it will take some time before the new signee becomes a contributor. Or perhaps his huge 6-foot-8, 360-pound frame will adjust to the rigors of the Big Ten faster than expected.

But either way, the Buckeyes envision a bright future for Jones or it wouldn’t have used one of its coveted final spots in the 2019 recruiting class to land him out of Indianapolis as a potential building block for the future.

â€œCoach [Ryan] Day has been wanting me ever since he got the job, honestly,â€ Jones told Lettermen Row after he publicly announced for the Buckeyes. â€œMe and Coach Day have a really good bond together. 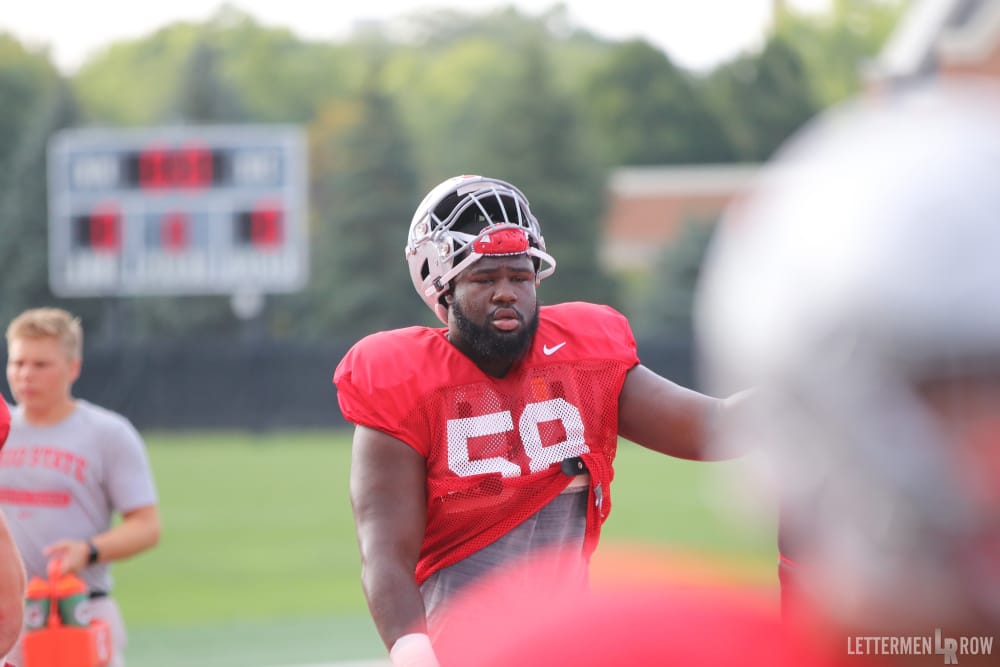 Ohio State has shown it can develop guys like Joshua Alabi into starting-caliber Buckeyes. (Birm/Lettermen Row)

“But I gave him a chance, and I just fell in love with Coach Day. I talked to them, my host was Joshua Alabi and when I talked to him, he just said he really loved it there and I was like, ‘OK, I think I can be like him.'”

Alabi needed some seasoning before he was ready to contribute for the Buckeyes. And the program proved it could get him ready for a role like a starting spot in the Rose Bowl, where Alabi thrived in the season-ending win on New Year’s Day that sets the table for him to potentially win a regular spot up front heading into spring practice.

Sometimes it requires patience with the big men. And nobody knows that any better than former Ohio State offensive tackle Reid Fragel, who was back in the Lettermen Row film lab for a BuckIQ breakdown of what Dawand Jones might provide for the program once he arrives and gets to work in the weight room and on the practice field. What did Fragel see in the 3-star prospect?