Don’t read too much into that. He’s just a big, stylish dude.

“I like to color coordinate myself for practice,” Greene said with a laugh. “I was wearing white shoes today. It was the first white shirt I found today before I left for the school.”

Greene is considering USC, though. It’s one of the four programs he actually visited in June. In the busiest month ever for a number of big-time recruits, this big-time recruit from California didn’t rush himself. He could’ve made a number of other visits, but doing so would have been at the expense of his team.

That’s not something Earnest Greene is going to let happen.

“Playing at a school like Bosco, I came here to be great and I’m a leader here,” he said. “If I was all over the country like a lot of other kids, I’d have missed a lot of practice time here. I will have an opportunity at the end of July to make visits, even if it’s only for a week. It was more important for me to be here.”

Knowing that puts an even greater onus on the three trips outside of Los Angeles that Greene did make. He went to Ohio State, Oklahoma and Texas, spending two days in Columbus. He’d been on campus with the Buckeyes before, visiting the school when he was a freshman while Kourt Williams was being courted by Ohio State. This time around, the two-day visit felt decidedly different for the 6-foot-5, 330-pound lineman.

“I honestly liked it a lot,” Greene said. “The first time I was there it wasn’t me being the focus, but this time was all about me spending time with Greg Studrawa, Kennedy Cook and even the graduate assistants. Everyone took time to get to know me, and they impressed me with the way they handled their business. It was personal but still full of professionalism. I spent a lot of time with the actual offensive linemen, and that was cool.

“I was spending time with Thayer Munford, Paris Johnson and Nicholas Petit-Frere. The coaches wanted to make sure that I felt good around those guys and that we all connected.”

Greg Studrawa has been working hard on Earnest Greene for a while now. During Greene’s visit, Studrawa got to see Greene working hard. The NCAA is allowing one-hour long private workouts for 2022 prospects making unofficial visits, and he took advantage of that. 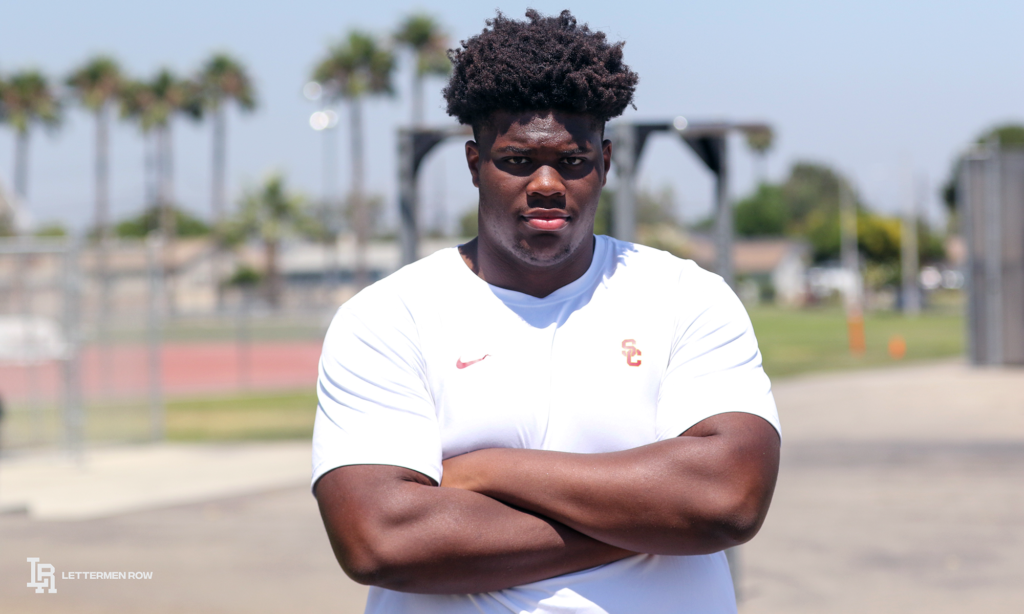 Earnest Greene had a USC shirt and Ohio State gloves on during his Thursday workout. (Birm/Lettermen Row)

“I could tell [Studrawa] is a really good person,” Greene said. “He was excited to get the chance to work with me, you could hear it in his voice. He really was very energetic and he cares about being a part of everything. I think that was interesting.”

AsÂ Lettermen Row was meeting with Earnest Greene on Thursday, the subject of Name, Image and Likeness naturally came up. Every recruit in the country is aware of it, and Greene knows now better than ever how the city of Columbus could impact his future — not just the Ohio State football program.

“I wouldn’t say it’s important,” Greene said. “But some schools, that football team is the only thing in town. That’s all people talk about, think about, so it could lead to some bigger opportunities. So it’s a factor at a place like Ohio State where the social media interactions and impact are far greater than anywhere else. It’s not even close.

“That’s a lot more people to get eyes on you in the mind of people in marketing and that’s something we’ve got to think about now.”

College football may be changing, but for now, most big-time recruits like Earnest Greene are looking for what has always mattered.

“To me, it’s still about relationships and the strength and conditioning program.” he said. “I need to go somewhere that is going to help me my best and a place that can show me my development. I know there are some high school freaks out there that go to college and make an impact. But most guys, it takes someone to get you there. That’s why that is important. It’s also important to have some coaching staff consistency, because a lot of these schools have coaches bouncing around like ping pong balls.”

Earnest Greene will be back at Ohio State in September. He’s making his official visit with the Buckeyes as they host Oregon on Sept. 11.