COLUMBUS — Jaelen Gill was already on the rise for Ohio State before the first practice of spring camp.

The veteran wide receivers were pointing to his improved work leading up to the Rose Bowl. The coaching staff was starting to think about ways to get the versatile H-back more involved offensively into the future. And Gill himself was noticing the difference after a somewhat slow start during the acclimation period early in his career with the Buckeyes.

So, it wasn’t necessarily a surprise to see him flashing in March. But by the time he capped camp off with one of the most productive performances in the Ohio State spring game, Gill was validating all that progress and making it clear that he’s ready to have the kind of impact that was expected when the former four-star recruit signed out of Westerville.

“It’s just being a lot more mentally prepared for things,” Gill said after the Rose Bowl. “Obviously just practicing harder than I was before, still trying to take as much advice from the older guys as possible. Eventually it just started to click for me.

“Hopefully I can continue that momentum and just work.” 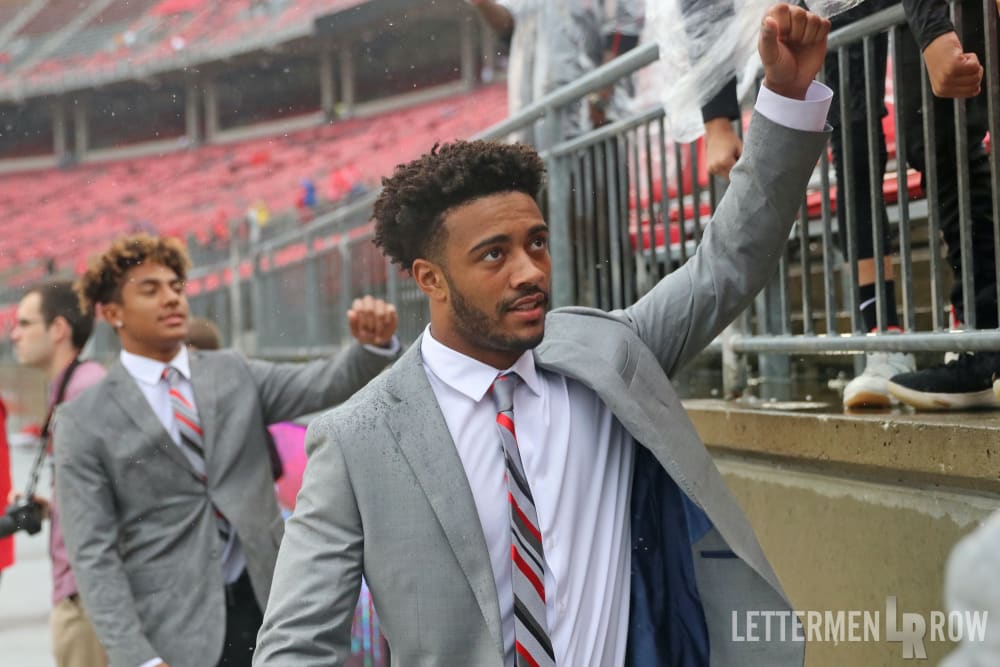 Ohio State redshirt freshman Jaelen Gill is an offensive star on the rise for the Buckeyes. (Birm/Lettermen Row)

The ball is really rolling downhill for Gill right now after leading the Buckeyes with seven catches for 95 yards in the exhibition in the Horseshoe a couple weeks ago. And while those scrimmages aren’t always the most useful tools to project the future, pretty much everything else the redshirt freshman had done in March and April suggested he was turning a corner and ready to contribute.

By no means is Gill a finished product quite yet. But Ohio State is starting to tap into his potential, and that could be significant for an offense trying to fill the void left behind when dynamic weapon Parris Campbell graduated.

“Great strides,” Ohio State wide receivers coach Brian Hartline said. “[Gill] is one of the guys who has probably made one of the biggest jumps. He’s playing fast, he’s on my hip wanting to learn and learn, he’s doing a great job with his academics off the field. There are still some things we have to clean up, and he knows that and we’ll keep that between us.

“But in the end, he’s doing a great job on the field and I’m excited for him.”

What is it about Gill that has caught the attention of the Buckeyes? How can he take that next step and become a true factor for Ohio State? When does a young receiver truly get comfortable in the system? Former Ohio State wideout Evan Spencer was back in the Lettermen Row film lab breaking down the spring performance of Jaelen Gill in the latest episode of BuckIQ.