COLUMBUS — There are no exceptions for young tight ends at Ohio State, not even for Jeremy Ruckert.

The athleticism may have already been clear. The ability for him to help as a receiving threat was always there. Obviously Ruckert arrived on campus with impressive credentials as the most coveted player in the country at his position.

But before tight ends can do anything else for the Buckeyes, they have to become physical, consistent blockers first. There is no negotiation on that front, and with Ruckert needing some time to adjust in that area as he transitioned from high school to the Big Ten champs, his chances of providing the instant impact that was widely expected last season slipped away.

But Year Two? That should be a different story.

â€œI think last year was huge for me,â€ Ruckert said. â€œGetting my feet wet in between the tackles and getting my head in there. I feel it was good for me. I used to play all receiver in high school. My first day playing tight end was last summer camp. 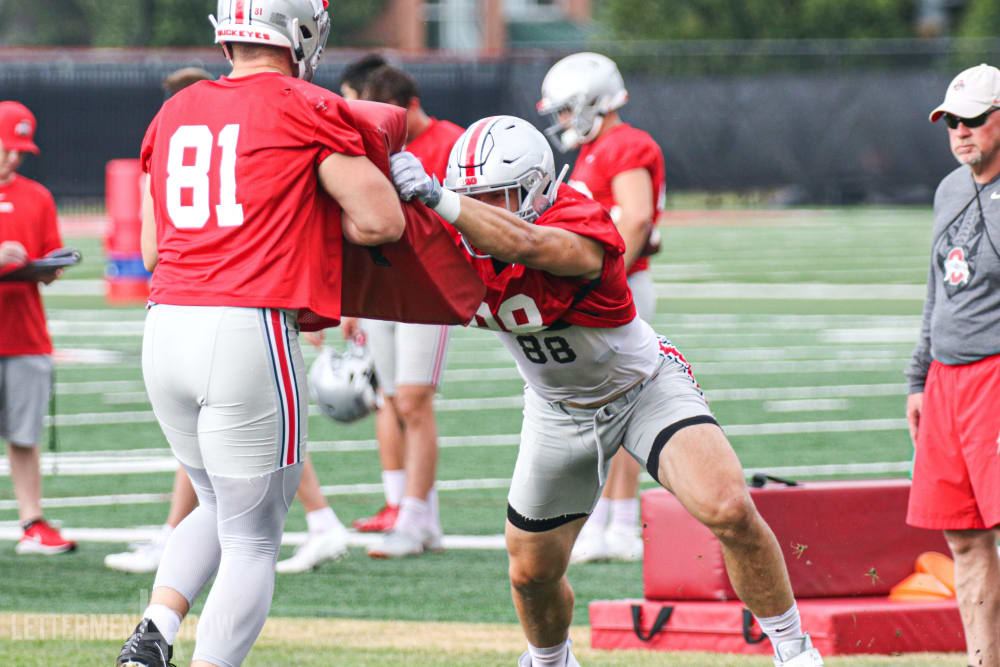 Ohio State tight end Jeremy Ruckert has worked to improve his blocking at the position in training camp. (Birm/Lettermen Row)

â€œIt was a really good transition last year, seeing and playing in games. Just seeing what it takes to get on the field, now I should be able to use my skill set at tight end.â€

The Buckeyes are well aware of the potential with Ruckert’s physical tools, and the coaching staff has made it no secret that he has the most upside among the tight ends.

But that’s also a deep unit with a couple of returning veterans on the depth chart either ahead of or alongside Ruckert, so nothing is guaranteed at this point of training camp when it comes to playing time. But with the sophomore ready to join Luke Farrell and Rashod Berry in the lineup, the Buckeyes have started toying with more two-tight end sets — and might also carve out more unique roles for a guy with Ruckert’s ability as a receiver.

Will Jeremy Ruckert get work as an H-back? How big will the jump be for a tight end going from his first season to his second at Ohio State? What are reasonable expectations for Ruckert as a sophomore? Former Buckeyes tight end Jake Stoneburner was back in the Lettermen Row film lab looking at areas where Ruckert has already improved as he projects the next step on BuckIQ.