COLUMBUS — Nobody asked for the new digit at Ohio State.

Jonathon Cooper was more than happy to stick with the familiar number he had worn throughout his career with the Buckeyes, one that paid tribute to his birthday and was personal for him.

Then Ryan Day stood in front of the Buckeyes on a Saturday morning during training camp with a new jersey in his hand. The Ohio State coach talked about the rich history of the program. He recounted the incredible impact players like Bill Willis had in setting the course for future generations on the football field. He preached about the importance of establishing selfless, player-driven leadership and paying tribute to the guys who most exemplify that for the Buckeyes.

Then he called up Cooper and handed him a scarlet jersey with his name on it and a brand-new No. 0 on it that just so happens to look like a Block O.

Now nobody will ever get to ask for that digit. It’s going to have to be earned, and Cooper was entrusted as the first Ohio State player to make sure it’s the one everybody on the roster wants. 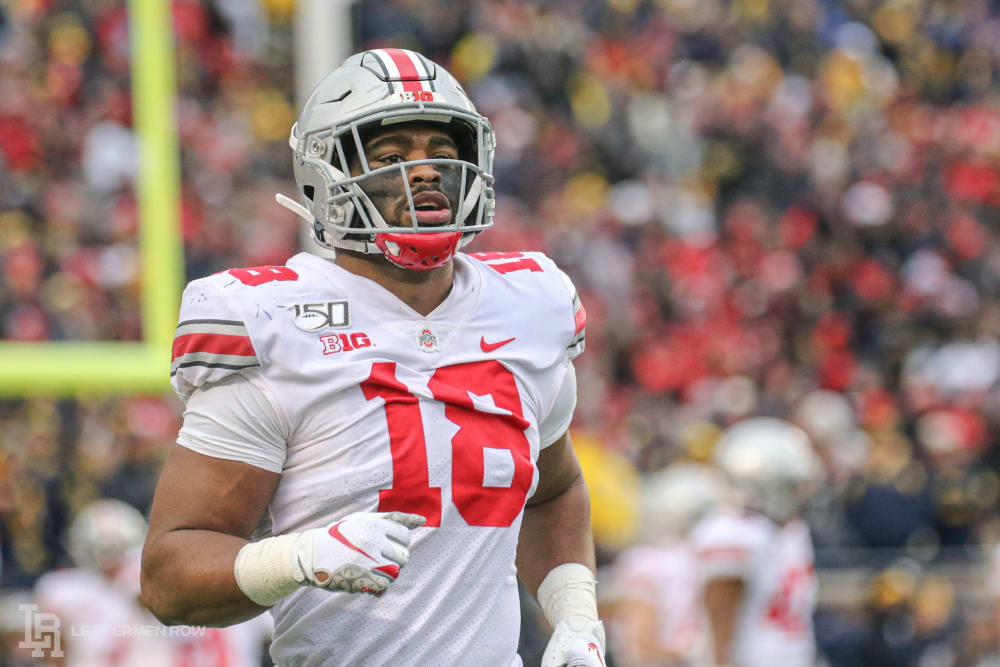 Jonathon Cooper is back for one more season at Ohio State. (Birm/Lettermen Row)

“I’ve got to make sure I give a good first impression with it — I’ve got to make it look good, man,” Cooper said with a laugh ahead of the Block O debut on Saturday against Nebraska.Â “But this is really humbling, honestly. I’ve thought about it a lot, when he was up there talking about the tradition and everything, I didn’t know who it was going to be. Then he finally said my name, and I mean, that’s a very humbling experience. It just shows me how not only my teammates, but also how the coaches view me and the guy they see me as. It just makes me want to be even better.

“It makes me feel like: What more can I do? Because I want to keep representing my teammates and this university the best way I can.”

That mindset, of course, is exactly why Jonathon Cooper was hand-picked by Day, the coaching staff, strength coach Mickey Marotti and dozens of other support staffers in the Woody Hayes Athletic Center during the selection process.

The NCAA approved the use of zero on jersey numbers in April, but it didn’t draw all that much attention initially from Ohio State since there wasn’t exactly a line forming to claim it. Eventually Buckeyes director of football operations Quinn Tempel pointed out how similar the zero in the font used for the program’s jerseys looks to the famed Block O logo, planting the seed for a new tradition.

Along with feedback from Marotti and player development director Ryan Stamper, Ohio State also decided to tie that honor to the past by naming it after Bill Willis, the All-American, national champion and NFL trailblazer whose No. 99 is retired in the Horseshoe. That was the easy part — although for this first awarding of the Block O, that decision wasn’t all that difficult either.

“It really should come from the offseason program and who has put years into the program and who has been through some adversity, who has worked through some things, who has fought through things and really lived our culture,” Day said. “With everything that’s gone on this year and the great tradition that Ohio State has, how can we now create something that can be new? We thought naming the award after Bill Willis would be a great decision because it’s great way we can honor him. So, then you ask who it should be?

“When you think about Jonathon Cooper, he’s been through a lot, he’s fought through adversity, he’s played defensive end, he’s from Columbus, he’s a captain — it was just a great fit. He’s the perfect first guy to wear that Block O, and we’ll just keep that going. I hope it’s something that stays in the program for a long time.” 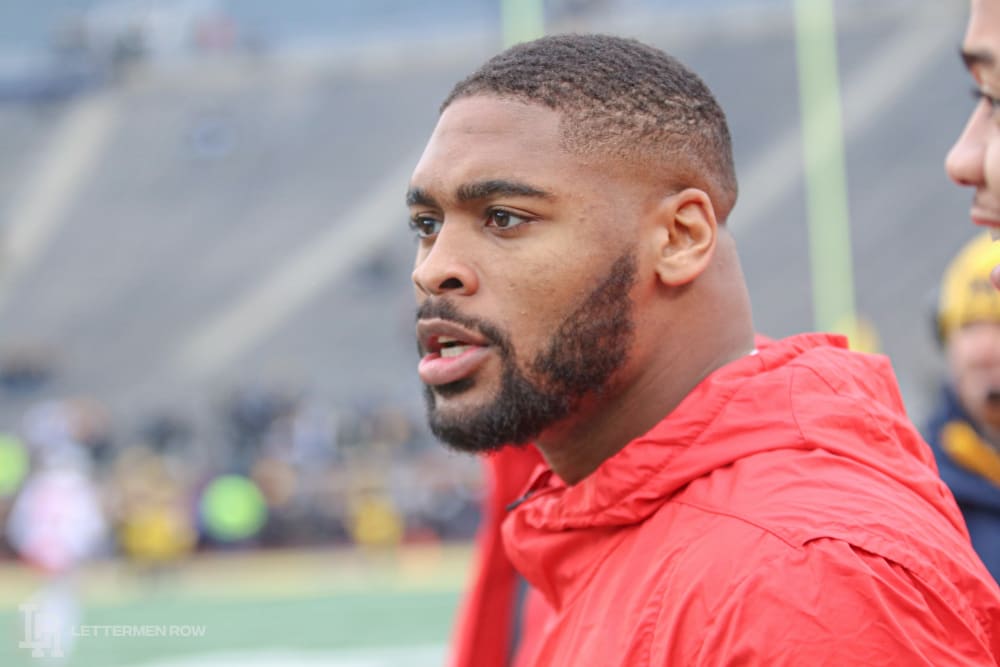 Cooper has the chance to set the foundation with it, making the Block O look good on the field and giving it meaning off it with the leadership that has made him a two-time captain. And he’s clearly warming to the idea, joking that defensive backs don’t have the right frames to wear it and pushing to keep it with the Rushmen unit of defensive linemen forever.

There will obviously Â be other positions that eventually get a crack at the zero, though players will always have the option to not wear it. And if an offensive lineman earns the award, for example, Day has already come up with a solution to put a Block O patch on the jersey instead.

But this is all still new for the Buckeyes, and they can’t simply snap their fingers and suddenly give the tradition meaning. That’s going to be up to Cooper starting on Saturday, and clearly he’s up for another challenge.

“As soon as I got it I realized it was a huge honor,” Cooper said. “Not only because it’s the first time in Ohio State history, but also because we’re honoring a great football player in Bill Willis. I feel like the Block O represents all of Ohio State University, all the staff, all the student-athletes, all the people here. You know, I don’t take that lightly at all. I definitely embrace it a lot. I realize how special that is, and I just want to make sure that whenever I put that jersey on and represent this new tradition that I’m doing the best I can with it. 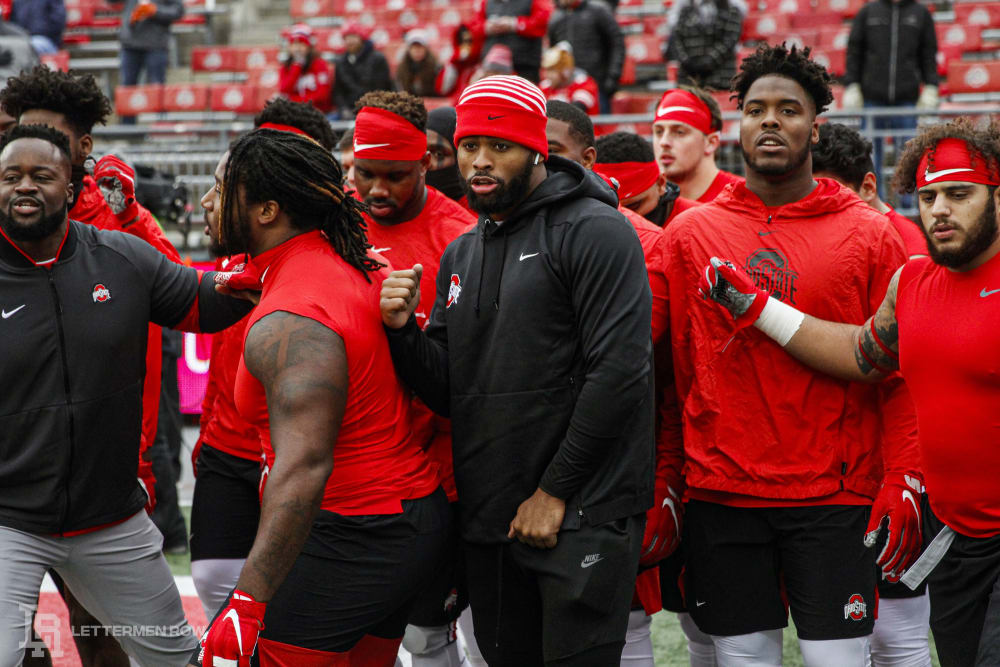 Jonathon Cooper wants the Rushmen to continue to have the chance to wear the Block O. (Birm/Lettermen Row)

“I honestly think I can make this something people want. It’s just a new tradition in general for Ohio State now, but I think people are really going to embrace that and whoever gets it after me will take the same approach that I am. I just know that with me being the first, it’s a lot of responsibility to make sure that, first of all, that I look good and play good with that on. I want to make sure that I actually start the tradition right, put on the Block O so that it can mean something.”

Jonathon Cooper didn’t ask for that number and all the responsibility that comes with it at Ohio State. And that’s exactly why he was given the chance to wear it.