For all the years coaching high school for former Miamisburg head coach Steve Channell, only Myers ever arrived into a program as a freshman and proceeded to start every single game he played in his prep career.

â€œWell that answer is easy: Zero, nobody other than Josh,â€ Channell told Lettermen Row of Myersâ€™ Day One starting prowess. â€œHow that all trickled down, Iâ€™m going to give you some quick background. I went to see Josh at the junior high, and as I was standing in the hallways it was pretty obvious who Josh was. He was head and shoulders above anything else.

â€œThen we got to the first practice, and I asked his parents during two-a-days if I could try him out at the varsity level. It became very evident after four or five snaps, I said this kid is gonna play for us now.â€

Myers, now a redshirt sophomore season after a decorated career that included consensus four-star, top-60 national rankings at Miamisburg, is starring for the No. 1-ranked Buckeyes, who are seeking to wrap up an undefeated regular season in Ryan Dayâ€™s debut campaign as head coach Saturday at No. 13 Michigan.

And the importance of performing in the Big House and against that rival certainly isn’t lost on the first-year starter in the middle of the Ohio State offensive line.

â€œIt presents that level of respect for the opponent, but when itâ€™s all you hear year-round, itâ€™s something that was planted in my mind when I was 18 and walked into the weight-room from the first day to the most recent,â€ Myers said. â€œI canâ€™t wait, I canâ€™t wait. Itâ€™s something Iâ€™ve dreamed about.â€

High school coaches, too, dream about the opportunity to help develop a player the ilk of Myers, whose father, Brad, and brother, Zach, both had gridiron careers at the University of Kentucky.

From that first varsity practice throughout a four-year career that proved a bit of a renaissance for Miamisburg — the program captured its first-ever playoff win and a 9-2 campaign in 2015 with Myers anchoring the line and Channell on the sideline — big-time college opportunities were going to await Myers.

â€œI thought after his freshman season, â€˜Iâ€™m going to put together some film clips to send to guys I know,â€™â€ Channell said. â€œPrimarily in the MAC, and a few guys in the Big Ten.

â€œThe first person to bite was Kevin Wilson, and we go back many, many years — to the point that I taught his wife in junior high. He called me, and said, â€˜Hey Steve, youâ€™ve got the real deal here. Iâ€™m gonna have him come up this winter for a [Hoosiers] basketball game.â€™ Kevin offered him that day.â€ 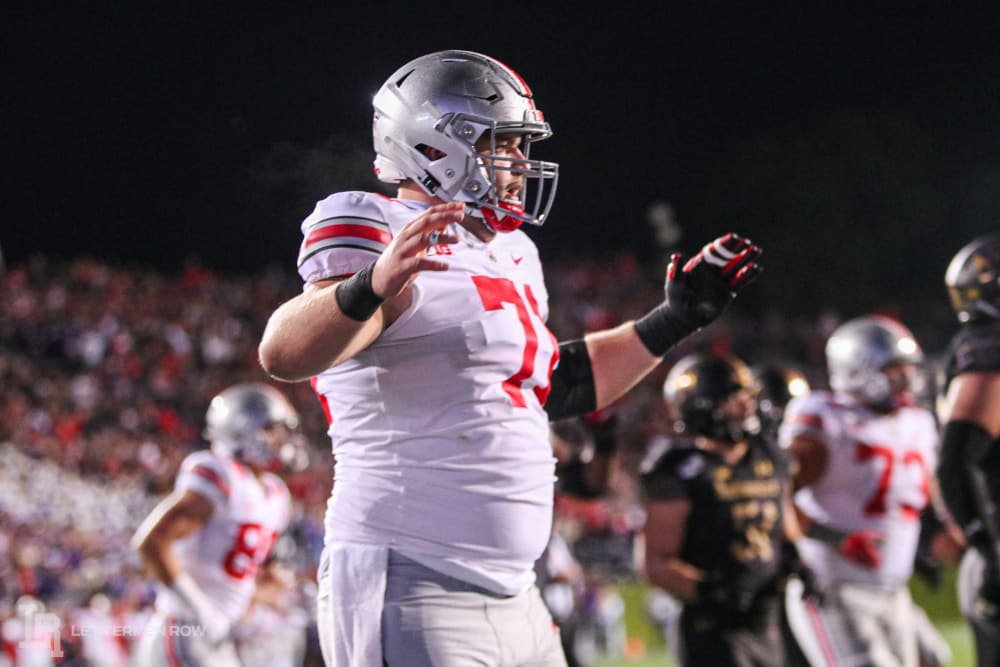 Ohio State center Josh Myers is elevating his game in the middle of the Buckeyes offensive line. (Birm/Lettermen Row)

There was the trip to Tuscaloosa, Alabama, and the in-person offer from Nick Saban, as well as an immediate stamp of approval from then-Tide assistant and current Oregon head coach Mario Cristobal.

â€œWe went to down to Alabama and Nick Sabanâ€™s camp for a day-visit,â€ Channell said. â€œMario worked him out and after a half-hour, he looked over at me, and gave me a thumbs-up. Like, â€˜Yeah, this kid is gonna be good.â€™ Nick took him into his office that day, and he offered him and I was with him. But Ohio State was always in the back of Joshâ€™s mind. Tennessee, Notre Dame, Brian Kelly came to see him, and they all offered.â€

But Myers separated himself in recruiting about as quickly as he had done so on the field. Myers knew Ohio State was home. He also knew he wanted to play with the best possible group of prospects to surround him in Columbus.

â€œJosh is a smart kid; heâ€™s not the type of four- or five-star guy that wants all the attention,â€ Channell said. â€œHe knew he wanted to go to Ohio State at that point. He committed after his sophomore year.

â€œHe told Coach [Urban] Meyer, â€˜Iâ€™m gonna be a Buckeye. You donâ€™t need to worry about me. Go work on my recruiting class. Iâ€™m good to go.â€™ A lot of these guys want all the fanfare, attention, drama, but thatâ€™s just not how Josh is. And thatâ€™s kind of how he is as a player. He doesnâ€™t want all the accolades or attention, just to help his team.â€

Do not conflate that selfless approach, however, with a lack of punishing instinct on the field. Channell turns instantly to a game in Myersâ€™ junior year for his signature moment.

â€œThereâ€™s a lot of Josh Myers stories or memories I have, but his junior year he drove a guy on the field off the field and all the way into the grandstands,â€ Channell said, still laughing at the memory. â€œHe got a penalty for a personal foul, but I argued it. I said, â€˜Heâ€™s taught to go the whistle, and the whistle hadnâ€™t blown yet when he took that guy to the grandstands.â€™â€

Worth noting: Josh Myers is again in a class all by himself on that list as well.