The ensuing collision punctuated the come-from-behind win in the Big Ten Championship for the Buckeyes, quite literally ending the game on the final snap and leaving Coan splayed on the sideline, heads on helmet and assistance from a teammate required to rise.

It even left Brutus the Buckeye covering his eyes, just steps away on the sideline.

More than anything, though, it showed exactly what Proctor can become for Ohio State in the future.

The 6-foot-2, 205-pound safety from Owasso, Oklahoma, has flashed all the skills of Ohio Stateâ€™s current stalwart at the position, Jordan Fuller — as well as those of recent program greats such as Vonn Bell and Malik Hooker.

It also revealed Proctor has emerged from a bevy of nagging injuries back to a healthy status and ready to contribute — both in the upcoming College Football Playoffs and as heir apparent to Fuller. 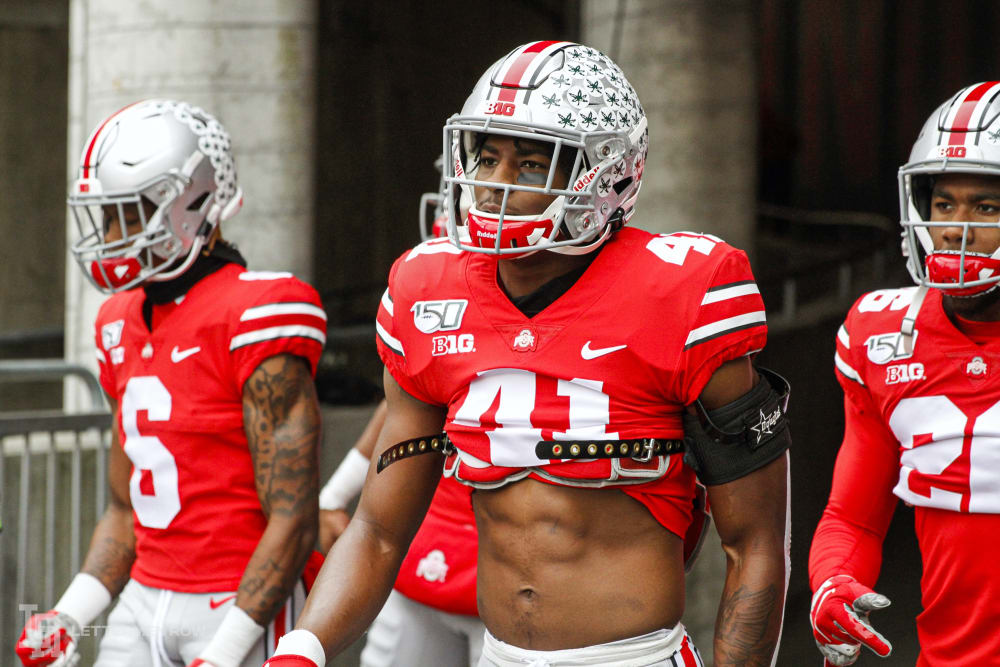 â€œIâ€™ve had a lot of injuries this season,â€ Proctor said, moments after celebrating the Buckeyes third-straight conference title by lying down on the Lucas Oil Field turf to make confetti angels. â€œBut, you know, I just keep my head, keep my composure and just keep going out there and try to prove that I can be here.â€

Moreover, Proctor wanted to make sure his teammates never had to question his commitment to the program.

â€œIt was very important to be there for them,â€ he said. â€œYou never just want to leave your teammates out there to dry.â€

Proctorâ€™s defensive brethren long have anticipated in volume the type of bone-jarring hit that Proctor uncorked to deny Coan the end zone and preserve yet another double-digit win for the Buckeyes — the latest going down as No. 23 since the start of last season.

But that tackle wasn’t a surprise to the Buckeyes. Proctor had been turning heads way back in preseason camp as he started developing into a future force.

â€œHe has about, like, eight interceptions,â€ said defensive back Jeff Okudah back in August. â€œHeâ€™s really rangy. I think heâ€™s really talented.â€

And by midseason, co-defensive coordinator Jeff Hafley praised Proctorâ€™s progress despite the injuries that prevented him in appearing in three games.

With his first career interception now secured and three pass break-ups on the season to showcase his versatility, Proctor has persevered through the injuries and positioned himself to take the next step.

â€œFinishing the season off right, Iâ€™ve got to go out with a bang,â€ Proctor told Lettermen Row. â€œThe injuries were just time-consuming. Just trying to keep your head in there, staying focused.

â€œBut this is doing nothing but helping me prepare for next year.â€

Proctor has also been preparing by continuing to glean wisdom from Fuller, helping solidify the foundation for a greater role in the future.

â€œOh yeah, definitely big,â€ Proctor said. â€œJordan helps me out a lot, I mean I follow him. Heâ€™s a leader to me. I look up to him.â€

With hits like the one that capped the undefeated regular season for the Buckeyes, Josh Proctor could be the guy in the future who serves as example to players just like himself.