The speculation, debate and conversations about Ohio State never end, and Lettermen Row is always ready to dive into the discussions. All week long, senior writer Austin Ward will field topics about the Buckeyes submitted by readers and break down anything that’s on the minds of the Best Damn Fans in the Land. Have a question that needs to be tackled, like the one today about Ohio State and the pressing topics for commissioner Kevin Warren? Send it in right here — and check back daily for the answers.

Will Kevin Warren answer any questions? I'll hang up and listen.

INDIANAPOLIS — The de facto State of the Big Ten Address is supposed to be the warmup act for two days of nonstop football conversation.

This time it might as well be the main event.

Yes, there will be plenty of talk about the Ohio State quarterback situation. Analysis of just how wide the gap is between the four-time defending champs and the rest of the Big Ten. Plenty of speculation about the future for a handful of coaches around the league.

But even with the assembled star power on hand, it’s Kevin Warren who will be in the brightest spotlight — right from opening kickoff.

For perhaps the first time ever, a press conference with the Big Ten commissioner might be the most anticipated part of the event, which has been shifted over to Indianapolis and begins on Thursday morning. What has traditionally just been a boring celebration of the league’s success, an accounting of all the money being raked in from broadcast deals and maybeÂ the occasional suggestion that some rule changes in the sport are necessary is suddenly going to be worth grabbing a bucket of popcorn. 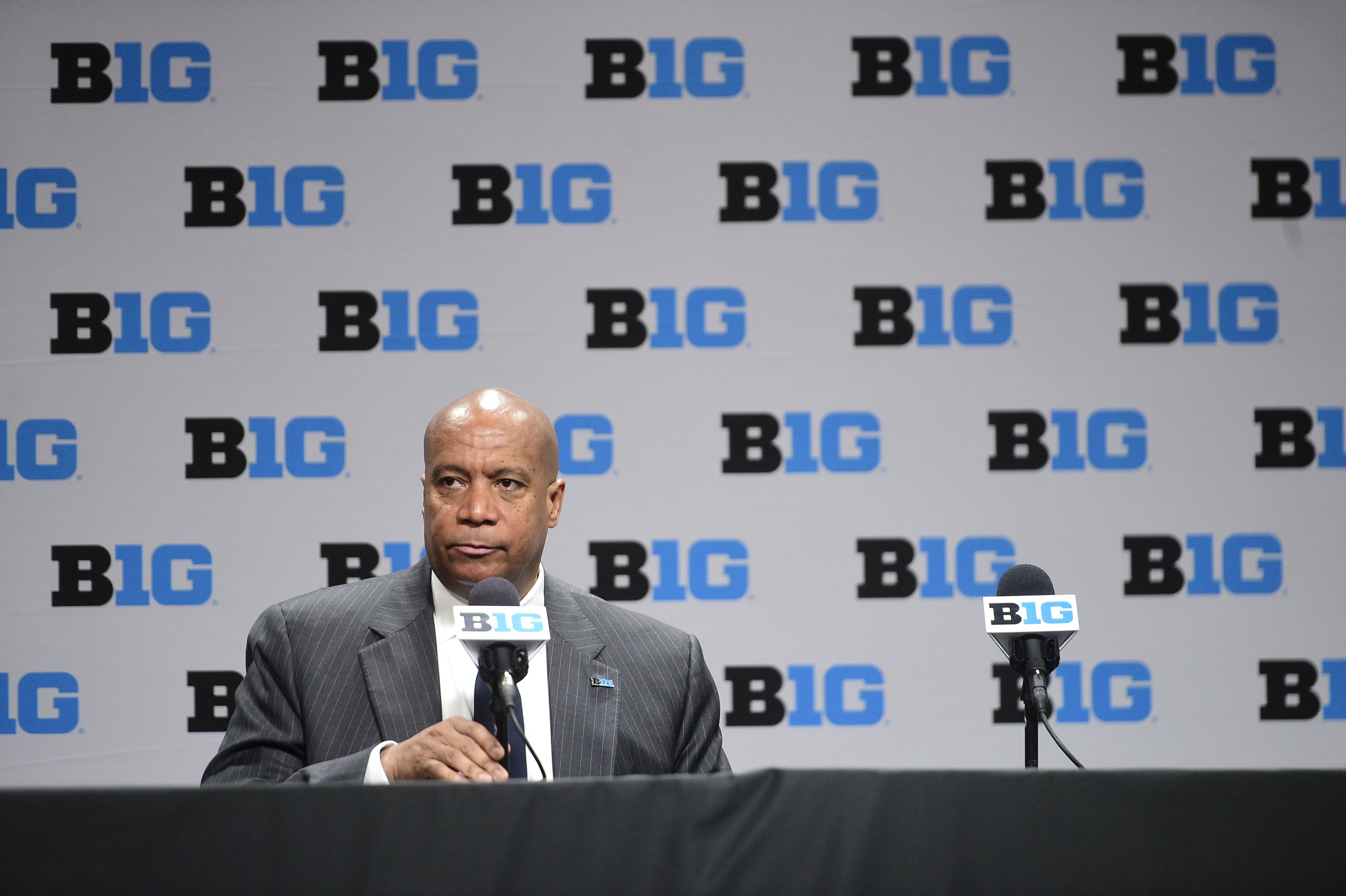 Big Ten commissioner Kevin Warren is heading into another year in charge of the league. (Thomas J. Russo/Imagn)

Lettermen Row has done one interview with Warren since he took the Big Ten reins, but for the most part he’s rarely been in public media settings — which was a major part of the frustration during his turbulent, difficult first year in charge. Even with the historic hurdles COVID created, clearly the Big Ten could have handled every step of the process better, starting with improved communication both behind closed doors and outside them for families, fans and media. And that lesson will be put to the test quickly as Warren starts Year Two still facing a large handful of pressing issues that will set the course for this season and the future of college football.

“Challenges are good,” Kevin Warren told Lettermen RowÂ in December. “Challenges are healthy. I think one thing challenges provide all of us is an opportunity to grow stronger. I think thatâ€™s what weâ€™ve done as a conference. I will always remain focused on my mission, and thatâ€™s really to protect and respect the tradition of the conference.”

” … Itâ€™s never been about me — this is really about the conference.”

Like everybody else, the Big Ten isn’t fully out of the woods yet with COVID. So, how Warren and the league are going to handle vaccination rates, any form of testing protocol, policies for forfeits and anything else tied to the virus will continue to be a major storyline. The Big Ten, though, won’t be able to solely just look ahead, because the handling a year ago left the door open for discussion about accusations of a “manufactured” letter, the bizarre timing of the schedule release and initial cancellation of the season and then the subsequent reinstatement — which included a nonsensical, no-bye-week slate.

Beyond that, though, the Big Ten will need to throw its weight around about the looming changes to the College Football Playoff. The commissioner will be pressed about the Rose Bowl’s stubbornness when it comes to an expanded field and whether the Big Ten will continue to let antiquated tradition stand in the way of any progress. And there will be no shortage of questions about NCAA governance alongside Name, Image and Likeness, twin issues that are critical to the future of college athletics.

Rarely has a single 45-minute session with a conference commissioner even been worth any sort of anticipation or come with any kind of stakes at all. But Kevin Warren is going to be under the microscope, and one way or another he’s got a chance to set a tone as the leader of the Big Ten.