The first introduction to Luke Farrell was on the hardwood, not the gridiron.

It was there that Perry High School coach Matt Rosati first caught a glimpse of Farrell and his potential.

â€œHe was big, but he had really good feet, moved really well. He was thin, but tall. You could just tell he had a good frame that he would be able to put some weight on. And he already had good hand-eye coordination.â€

That frame eventually would grow into the 6-foot-6-inch, 250-pound starting tight end for Ohio State. And his development has continued into the start of the Ryan Day era with Farrell creating mismatches in the passing game, establishing a physical blocking presence and playing a key role in a 45-21 win against visiting Florida Atlantic. 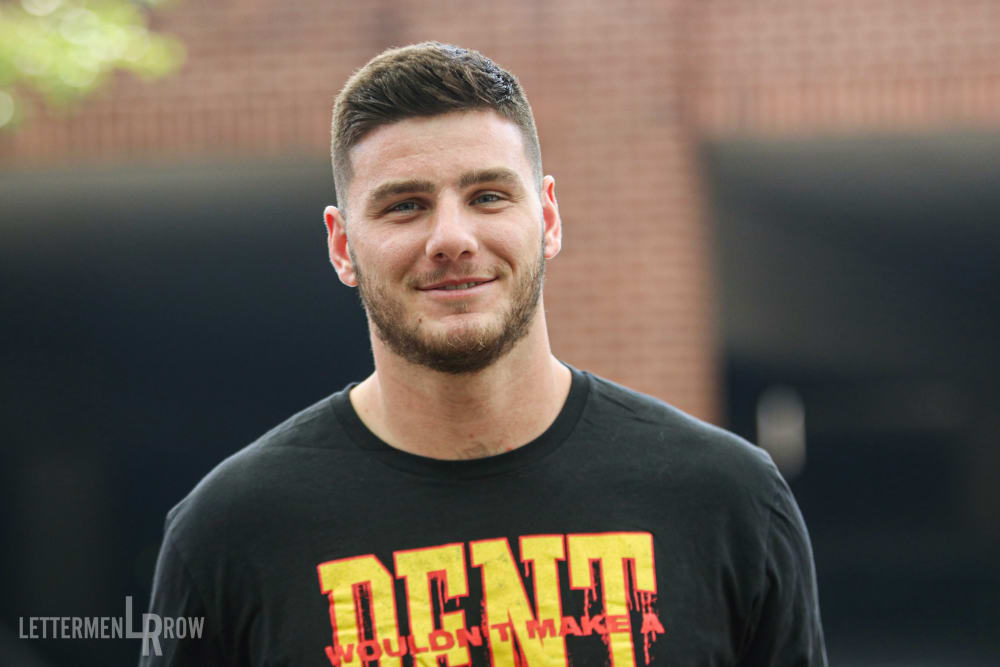 Ohio State tight end Luke Farrell has been hailed for his work ethic dating back to high school. (Birm/Lettermen Row)

â€œI told Coach [Urban] Meyer and all those guys, Lukeâ€™s one guy youâ€™re not going to have to worry about,â€ Rosati said. â€œHeâ€™s going to be an outstanding student, show up every single day and work. Heâ€™s someone I knew over a long period of time, a true All-American superstar, but his academics stood out.

â€œHeâ€™s diligent about the classroom and didnâ€™t let all the accolades ever affect him. He comes back to the weight room and sees the guys ]on the current team]. Heâ€™s still just the kid from Perry.â€

But the kid from Perry always has grown up quickly on the football field, first as a freshman who made his way onto the varsity at Perry and now as a Buckeye with 22 career games under his belt one week into his junior season.

â€œLuke was always very quiet and very driven, and we could tell when he was a freshman, he was probably already about 6-foot-3 and 175 pounds, athletic — and we could just tell from his body type he was going to grow into something pretty special,â€ Rosati said. â€œWe tried to hone that skill from a receiving aspect, because we knew the body would develop. We just really knew we had something special.

“Luke was very quiet, extremely coachable and driven. He was definitely somebody who wanted to get better and worked hard, but not somebody who would brag or be boisterous.â€

Farrell, of course, produced plenty of moments to flash some exuberance at Perry. Rosati always hearkens back to his favorite pair of plays, for altogether different reasons.

â€œOne of my best memories of Luke playing football, and really there are two stories,â€ he said. â€œNo. 1, weâ€™re playing arch-rival Madison, game is on TV, and Luke made this unbelievable one-handed catch in the fourth quarter. Snatched it out of the air, scored a touchdown on like fourth-and-9, just made this unbelievable play and helped us win.

â€œAnother one, he caught a pass, close to 92 yards, heâ€™s about to go into the end zone, he dove into the end zone and the ref marked him out at like the 1-foot line. He kind of went down on his own, he ended up short, we teased him about it forever and heâ€™ll still get mad if I bring it up to him.â€

Still, for all the moments on-field that catalyzed Farrell into a consensus four-star prospect, Rosati has steadfastly pointed to the character his former pupil always displayed.

â€œItâ€™s everything that we stand for,â€ Rosati said. â€œWe point right at Luke Farrell, because heâ€™s everything we dream we can be. Heâ€™s somebody that works so hard in the classroom and in the field. Lukeâ€™s definitely an example of that.

â€œHeâ€™s a poster child for everything we are trying to help our kids accomplish.â€