COLUMBUS — The Ohio State tight ends are never going to be the first option, and Luke Farrell is certainly well aware of that.

Those guys probably won’t be second on the list, either. In fact, it’s hard at times to figure out just how close to the top Farrell and the rest of that unit might be when it comes to options for the dynamic passing attack the Buckeyes are unleashing.

Obviously the tight ends have been important to the program for years, and the hard work they provide as blockers for the running game always gets pointed to as part of the overall success at Ohio State. But seemingly every offseason is spent focusing on how guys like Farrell could potentially provide another element to the offense through the air, typically without the production ever really changing much.

After flashing in the second half of the season in his first year as a starter, though, could a stronger, more fundamentally sound and experienced Farrell be a candidate to finally change that?

“We’re earning that trust,” Luke Farrell said late last season. “Whether that was with Dwayne [Haskins] or the coaching staff, we’re just trying to be a reliable option for them. That’s been nice. 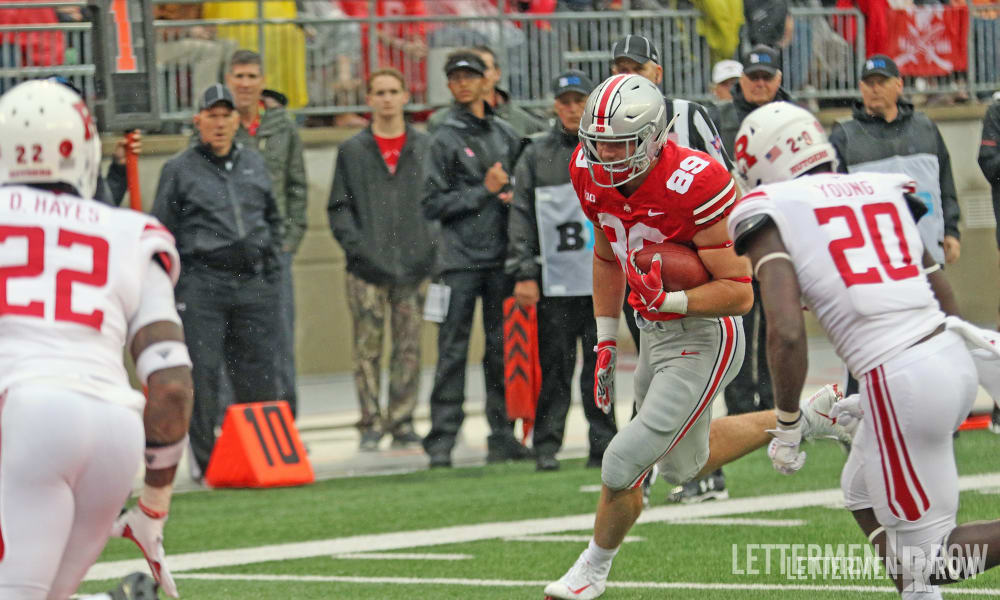 Ohio State tight end Luke Farrell is looking to improve his numbers this season for the Buckeyes. (Birm/Lettermen Row)

“But it’s not expected at tight end to get a ton of love. When it’s there, it’s there — and that respect from our teammates is really all we need. But the opportunities [to make catches] will be there moving forward.”

Odds are, there suddenly be a flood of them coming Farrell’s way. But he could easily top the 20 total receptions he logged last season, especially if he can string together a few more multiple-catch outings like he did in important games down the stretch for the Big Ten champions.

What helped Farrell stand out as a target as the Buckeyes made their title push? How can he take the next step? Will the tight ends finally get more action outside of just blocking? Former Ohio State tight end Jake Stoneburner was back in the Lettermen Row film lab for the latest episode of BuckIQ, this one looking at Luke Farrell as the buzz around his game starts to build during spring practice.