At a podium in the Woody Hayes Athletic Center, the good-natured, quick-witted center took a question that initially threw him for a loop.

“Am I mean person? No,” Myers said with a laugh. “But that’s a key thing about being an offensive lineman: Being a different person on the field.”

Once Myers gets there, all the easy smiles and casual conversation fades away, replaced by a tough, nasty attitude that has allowed him to quickly become one of the Big Ten’s best centers in his first season as a starter.Â And with Jonah Jackson and Wyatt Davis on either side of him at guard providing the same kind of edge, the Buckeyes have used that impressive interior blocking to fuel one of the nation’s most prolific rushing attacks. 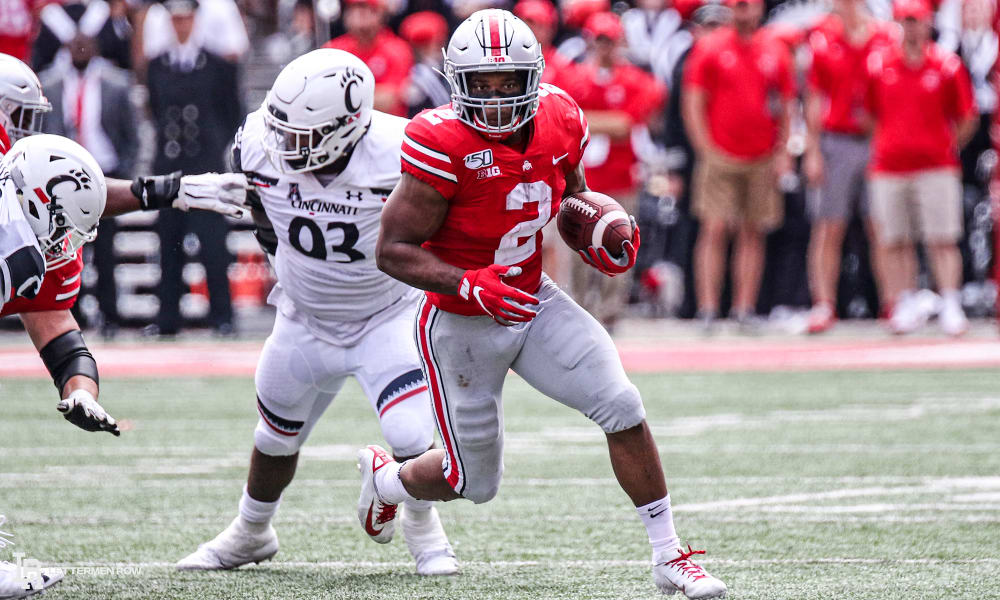 Ohio State running back J.K. Dobbins has had some huge holes to run through thanks to the offensive line. (Birm/Lettermen Row)

That kind of success from three new full-time starters might have been hard to envision in the preseason. But coming out of the off date and heading into the second half of the regular season on Friday night at Northwestern, the revamped offensive line has been a critical component of the fast start for the unbeaten Buckeyes.

“Only six games in, but so far, so good,” Ohio State coach Ryan Day said. “I think the communication has been really good with those guys inside, and all three of those guys are really new. Wyatt obviously played towards the end of the year, but those are three new guys in there that I think have handled it well so far. But we’re going against a really good defense this week, and we’re going to continue to go against really good defenses moving forward.

“You know, the tale is yet to be written. But obviously a good start.”

The Buckeyes will get another measuring stick for those big guys up front against a stout Northwestern defense on the road, but there have been no signs so far that the linemen can’t handle it.

What has helped Josh Myers and the other first-time starters on the Ohio State offensive line thrive so far this season? Can the powerful rushing attack get even better as the season progresses? Where are the areas the Buckeyes might still be able to grow down the stretch? Former Ohio State offensive lineman Reid Fragel put on the film to answer those questions in the latest episode of BuckIQ.