Finding the ideal solution to balance those two objectives has been nearly a decade in the making for the Buckeyes. But now they believe they’ve found one with an overhaul to the season-ticket pricing that will be formally voted on Thursday by the Board of Trustees: Per-seat Contributions are coming to the Horseshoe starting with the 2022 football season.

“This has been a focus in our crosshairs for a long time,” Ohio State athletic director Gene Smith said. “It’s been something that we evolved to, and I’ll never forget the big discussion about just going to variable ticket pricing in the Shoe. It was like heresy then, it’s funny now. It’s just been inch by inch. This has been in the works for a long time.

“If you were to build the Shoe today straight out with no history, no embedded constituencies, no grandfathered-issues, nothing and were to seat it, this is how you would see it. Maybe it wouldn’t be six price zones. It could be scaled with less or more, but you would scale it. You just have to figure out based on the day’s fan behavior what would fit, but you would definitely scale it.”

This gradual transition actually started back in 2012 after Ohio State hired an outside firm to perform a ticket study for the program and offer recommendations about the next step to help the Buckeye Club continue to meet the demands of paying for all student-athlete scholarships. That $29 million price tag was only getting tougher to fulfill under the old model, and while the pandemic didn’t factor into this decision, it is a reminder of the attendance and financial challenges that even powerhouse programs like Ohio State are facing.

So, what does this shift mean for the Buckeyes moving forward? Here’s how Lettermen Row understands the move for Ohio State after conversations with Gene Smith and program officials. 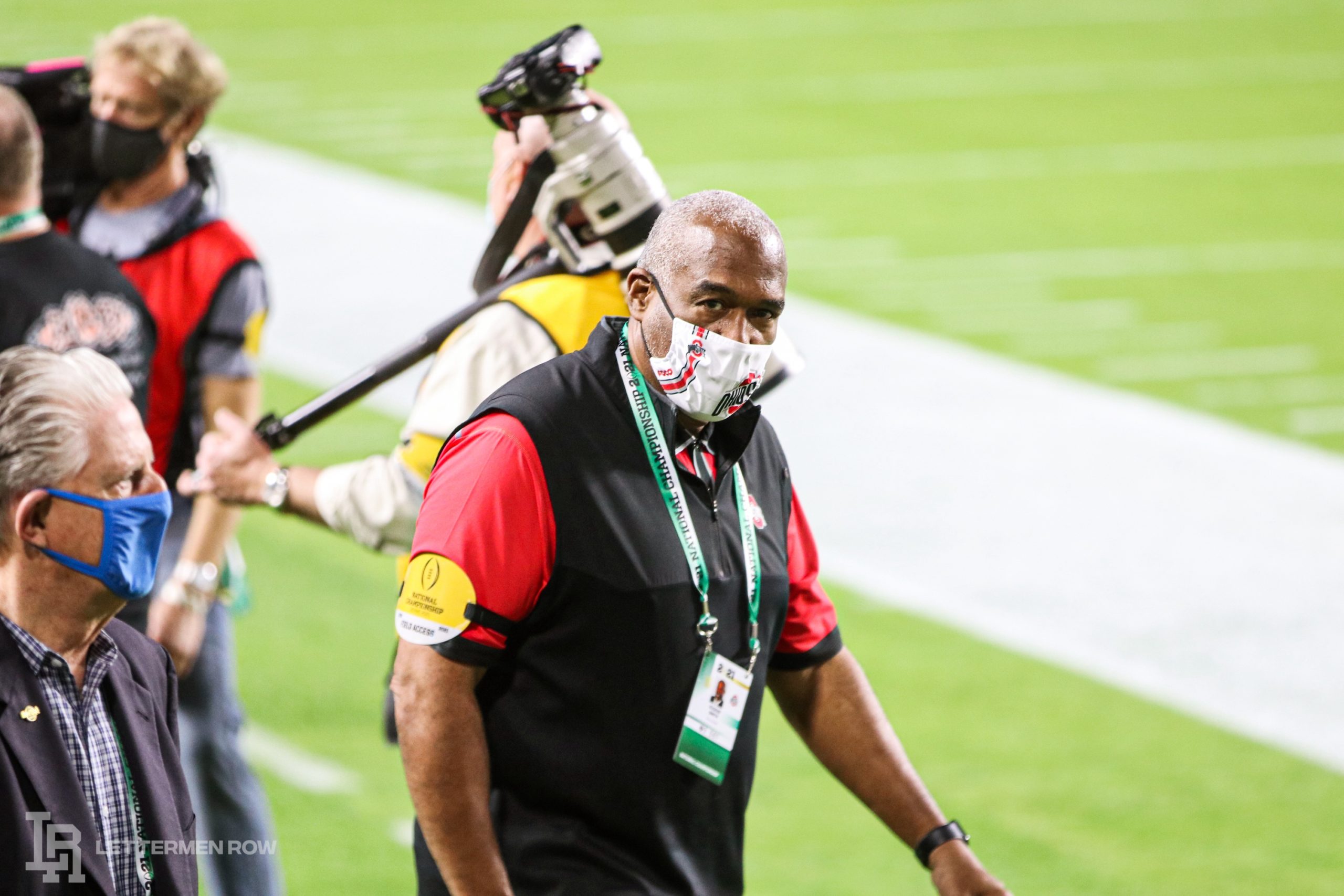 Ohio State will have six price zones in Horseshoe

For years it was possible for two random people to sit next to each other in the A Deck at the 50-yard line and have paid wildly different prices for the season tickets. That obviously wasn’t an equitable approach, and it’s not the way it will work at the Horseshoe moving forward.

Ohio State will now have six pricing zones for the Per-Seat Contributions, and an even playing field will now exist for everybody buying into each respective level. Historically there have been season-ticket holders who weren’t required to pay the Buckeye Club to buy seats, but those exceptions will no longer exist.

The most expensive PSC will check in at $1,500 per seat, not counting the cost of game tickets. From there the price scales down, and over half of the seats in the Horseshoe will cost $250 or less to reserve — including 14,000 that will still require no donation at all.

“The thing that I’ve embraced the most is that we’re really scaling the house,” Ohio State athletic director Gene Smith said. “We’re really looking at the diversity of our fanbase and providing people an option to sit in a price zone based upon their financial capacity. We’ve done it in basketball where we have different price zones, we went to variable ticket pricing a while ago for football, so we’ve finally got to the point where we’re catching up with other schools.

“People have choices. You have choices when you get on an airplane: Do you want to sit first class or economy class or coach? It’s the same here, relative to having the diversity in price zones. Will it help us financially? No question. The Buckeye Club is the funding source for our scholarship program, which right now averages a little south of $14 million a year. We need to grow it. So, we’re scaling the house.”

Buckeyes are not raising game-ticket prices

If there’s a limit to how much fans are willing to pay to watch Ohio State, the program knows it is probably getting close to that threshold. So, for the second year in a row, the Buckeyes are freezing the prices in place and trying to keep that streak alive moving forward as long as possible.

The PSCs will change the final price tag for some folks, there’s no question about that. But Ohio State projects that under the new model nearly one-third of the current season-ticket holders will pay less for their seats, and it is also trying to open up more avenues to get into the Horseshoe as it continues to build mini-packages in an effort to add even more ways to get in the stadium on game day.

“Our ticket prices are at the top of the pyramid in the country, and we don’t want to continue to increase those that much,” Smith said. “We want to keep that steady, and we’re not going to increase them this year — that’s two years in a row where we don’t increase ticket prices. So, really it’s a diversity in the seating options available in the Shoe.

“I wanted to make sure that we had a zone that had a bunch of seats that didn’t require a donation so that people can choose to come in without a donation. We’ll still have our packages, our mini packages have been wildly successful — that was also a new iteration for us in the Shoe. It worked, so we want to do that again. That price zone gives us the flexibility to do that. We looked at a number of different models, but we really had to take into consideration what we have and how it works for us.” 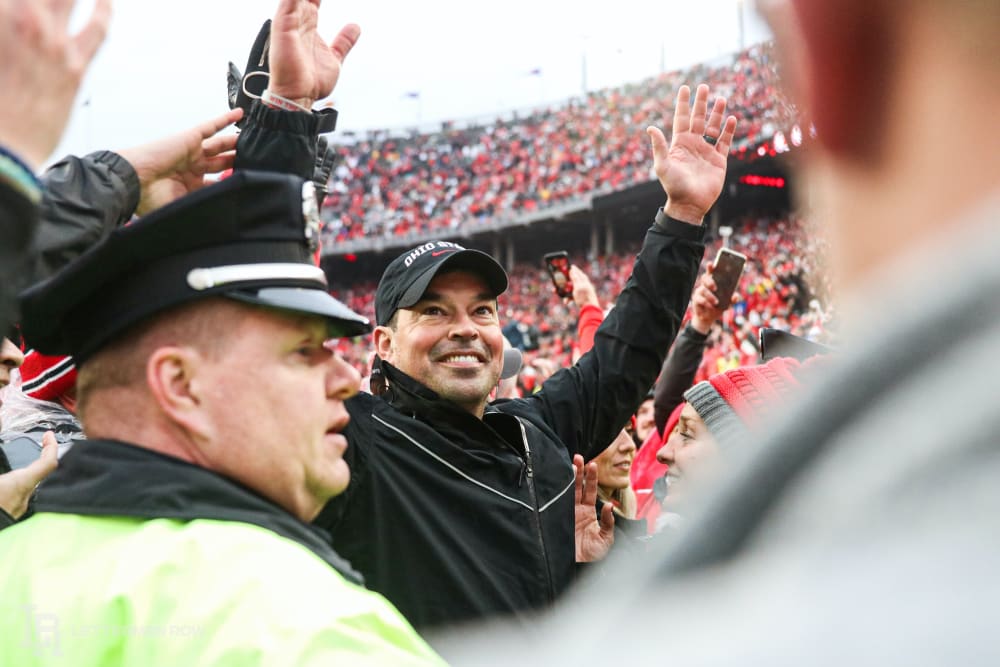 Gene Smith has known changes were needed for a while, but there were some lines he didn’t want crossed at Ohio State.

The Buckeyes pride themselves on allocating one of the largest batches of tickets for students in the country. That had to be protected.Â The faculty and staff are obviously critical to running a university, and those people deserve the right to sit in prime locations in the Horseshoe.Â And the lifeblood of the department are the athletes who actually wore the Scarlet and Gray, so the Varsity O needed to be protected as well.

All of that was part of the equation for the Buckeyes as they tried to manage that delicate balance of bringing in scholarship money with protecting the tradition of the program and the home-field advantage in Ohio Stadium.

“So, at the end of the day, we have to be sensitive to that.”

There is no expectation at all that Ohio State will have a full Horseshoe this season, though it is preparing to welcome back fans in some capacity that has yet to be determined for home games starting in September. So, from that perspective, the tweaks in the season-ticketing model don’t make any difference for 2021 for the four-time defending Big Ten champions.

The target date for the Buckeyes is 2022 either way since the program felt it was best to give plenty of advance notice to the looming changes. And that slate in the Horseshoe should be incredible with Notre Dame and Michigan bookending the regular season for Ohio State.

“What we’re trying to do by doing it now is allow people a long runway to really take time and learn about the model,” Smith said. “Those who have to make donations, make donations and plan appropriately. It’s a long runway. We’ve always tried to give people good notice, but this is the most in my tenure where we have actually given this much time. I think it’s the right thing to do.”