COLUMBUS — Austin Mack wasn’t the primary target on the play for Ohio State, but he was ready anyway.

That’s the only approach a wide receiver can take on a unit as deep and talented as the one the Buckeyes have again this season for a variety of reasons, starting with the fact that consistent targets are going to be hard to come by.

The Buckeyes are still rotating through as many as six receivers, still don’t play favorites by naming go-to wideouts and still emphasize taking whatever the defense gives them for a quarterback who has proven he will spread the football around to anybody who is open. So, Mack made his move back to the middle of the field not completely expecting a pass to come his way — but obviously fully aware of what he could do with it if it arrived.

“I was actually a check-down for that play, so to even receive the ball on that play was great,” Mack said. “I had to do something with it, and they were going to have to hit me kind of hard for me not to score on that one.

“It was a great moment.Â There’s been adversity, it’s been a ride of ups and downs. But, I mean, the Buckeyes are 12-0, and I’m doing everything I can for my team and I have a lot of momentum right now. But being able to score in The Game, that’s remarkable.” 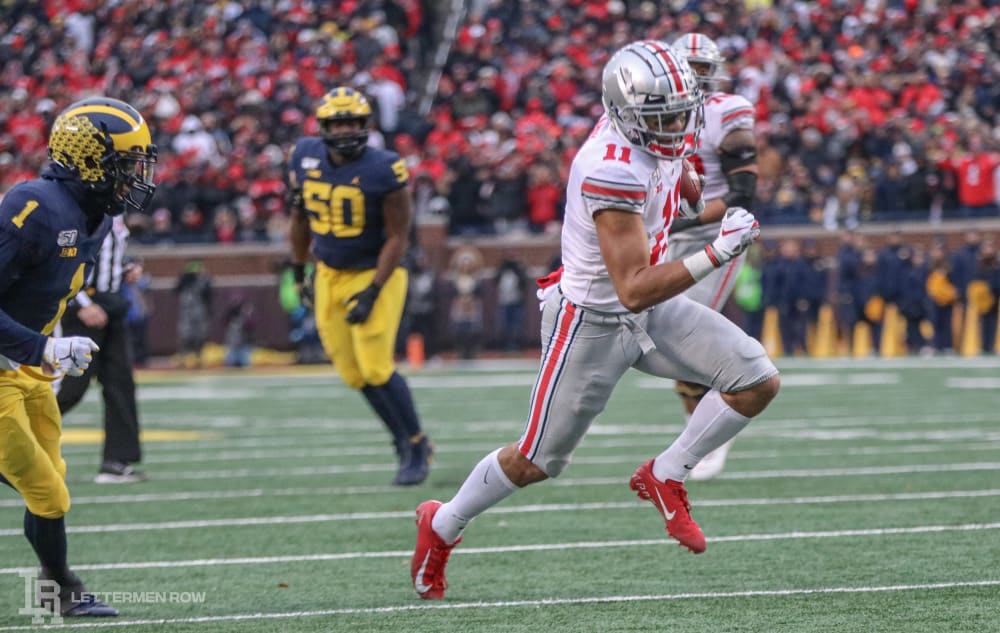 That feeling was shared by three other Ohio State receivers in the latest dominance over Michigan, with Mack’s flex in the end zone doubling as a message about the strength of the unit overall. K.J. Hill was a red-zone weapon yet again, Chris Olave torched the Wolverines for the second year in a row — and Garrett Wilson freelanced a route that will go down in rivalry history for what it meant to quarterback Justin Fields after his injury.

Standout senior Binjimen Victor was the only true regular who didn’t join the party last week, but he’ll head into the Big Ten title game this week with six touchdowns to his credit already this season. And on a fast track in Indianapolis, don’t be surprised if Jameson Williams gets in the mix for the Buckeyes as well.

The rushing attack continues to dominate the attention for Ohio State, and there’s good reason for that. But the wide receivers haven’t missed a beat, and that unit just offered a reminder that it will certainly be a handful in the postseason — starting on Saturday against Wisconsin.

What has made the Ohio State wide receivers so dangerous as the season has progressed? Was there a message delivered when Austin Mack flexed in the end zone last week? Where can the Buckeyes still get better even in the postseason throwing the football? Former Ohio State national champion Evan Spencer was back in the Lettermen Row film lab looking at the depth of Zone Six and answering those questions in the latest episode of BuckIQ.