COLUMBUS — The end of a remarkable recruiting run for Ryan Day and the Ohio State football program is in sight.

With the start of fall football camp right around the corner, and the June/July recruiting dead period coming to an end on Wednesday, a few remaining major targets will either send the Buckeyes into the season feeling sky-high or force them to reassess their recruiting board at a vital position moving forward.

Starting with the commitment of 5-star receiver Julian Fleming on May 31, Day and the Buckeyes have tallied 13 new verbals over the last two-and-a-half months and vaulted up the national rankings. Ohio State now holds the country’s third-ranked recruiting class.

The next ten days could position Ohio State — even if only temporarily — as the top-ranked class in the country, if everything goes according to plan.

With 21 commitments total, the Buckeyes have room for just a handful of new verbals. Three of their top targets are making decisions in the next week-plus — including a pair of running backs coach Tony Alford’s biggest priorities in the 2020 cycle: 5-star Arizona prospect Bijan Robinson and 4-star Floridian Jaylan Knighton.

But there’s likely to be another big decision before then. 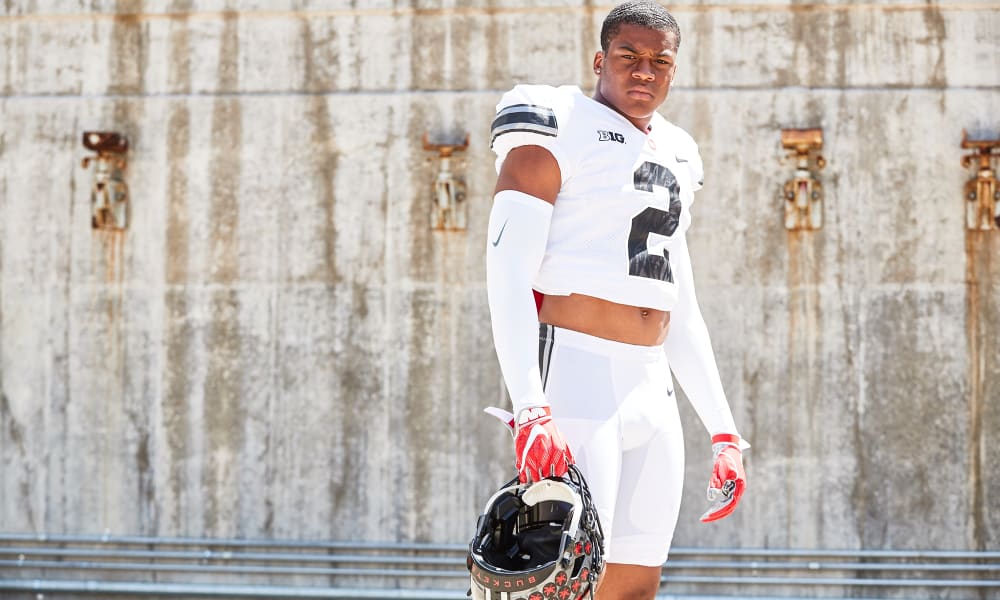 Where does Ohio State stand with Kourt Williams?

Before Robinson or Knighton make any declarations, though, the Buckeyes will find out if 4-star California linebacker Kourt Williams, their top prospect at their newly-minted Bullet position, will choose Ohio State over Texas A&M, Tennessee, Penn State and Oklahoma.

I won’t spend too much time rehashing this recruitment because it was the subject of a Recruiting Question of the Day topic just about a week ago. But it’s important to understand the importance of Williams to the Buckeyes class at this point. He’s a perfect fit from a personnel and personality standpoint, and his desire to leave the West Coast for college should provide Ohio State with some confidence as a decision comes, whenever it does.

Williams does not have a specific date for an announcement but has told Lettermen Row that he will decide no later than next Monday. He’s in every-day contact with Ohio State assistant Jeff Hafley, regularly speaks to Ryan Day as well and is a close friend of Buckeyes verbal Clark Phillips, another native Californian who has decided to head to the Midwest for college.

I think Williams will do the same.

As mentioned, Jaylan Knighton, the country’s third-ranked all-purpose back, is set to make his college decision. Unlike Williams, he has a specific date in mind: July 29.

Ohio State hosted him for an official visit in June. Even before then, there had been positive talk from Florida sources about the Buckeyes chances with Knighton for months before that trip occurred. Florida State and Miami are hoping to hold off Ohio State, but right now it seems very likely the 5-foot-9, 185-pound back picks the Buckeyes come next Monday.

Recruiting South Florida players can get wild, so there’s no guarantee a commitment from Knighton ends the intrigue here — especially since he’s right down the road from the Hurricanes. To this point, the work Tony Alford has done in this recruitment has been remarkable, but a commitment could just be the start of it.

What about Bijan Robinson and Ohio State?

I know that the Buckeyes are continuing to chase standouts like 5-star cornerback Elias Ricks, but in my mind there’s no recruit bigger from this point forward than Bijan Robinson, the Salpointe Catholic (Tucson, Ariz.) 5-star tailback who visited Columbus in June.

Robinson, the country’s fourth-ranked tailback, is making a college choice on Aug. 2 and will decide between Ohio State, Texas and USC. Although the Buckeyes and Longhorns are thought to be the leaders in the clubhouse, family ties to Los Angeles make the Trojans an interesting possibility for him.

That said, it’s hard to imagine Ohio State whiffing on each of their top targets at running back, and Robinson is a player Alford and Day have worked for a year-plus, even though he’s only been to campus with the Buckeyes once. A teammate of recent Ohio State verbal Lathan Ransom, Robinson keeps his feelings close to the vest, but there’s been a clear surge of positivity when it comes to his recruitment and the Buckeyes.

The 247Sports crystal ball leans toward Ohio State, and that’s usually a fair indicator of what’s coming, especially this close to a decision. Adding Robinson could help close out all offensive recruiting for the Buckeyes in 2020 and cap off one of the country’s best offensive recruiting classes.

And it will probably be the best in the nation when it’s all said and done.