COLUMBUS — The memory was still fresh for Jeremy Ruckert’s entry in the Ohio State tight end Catch of the Year contest.

The sophomore needed his memory jogged about the competition, though, momentarily forgetting exactly when Luke Farrell offered his submission to the highlight reel.

“When was Luke’s?” Ruckert asked. “Rutgers? Oh yeah, that was amazing. That one was really cool.”

So was Ruckert’s, of course, a leaping catch with his body fully extended that also came in a much higher-stakes situation than the one Farrell snagged late in a blowout at Rutgers.

The degree of difficulty in the back corner of the end zone with a defender draped over him might have been higher for Farrell. The moment was bigger for Ruckert as the Buckeyes were beginning to rally against Wisconsin in the Big Ten title game. But since there are relatively few targets to go around, the fact that there’s even a conversation about which Ohio State tight end had the best one-handed catch of the season is remarkable all by itself. 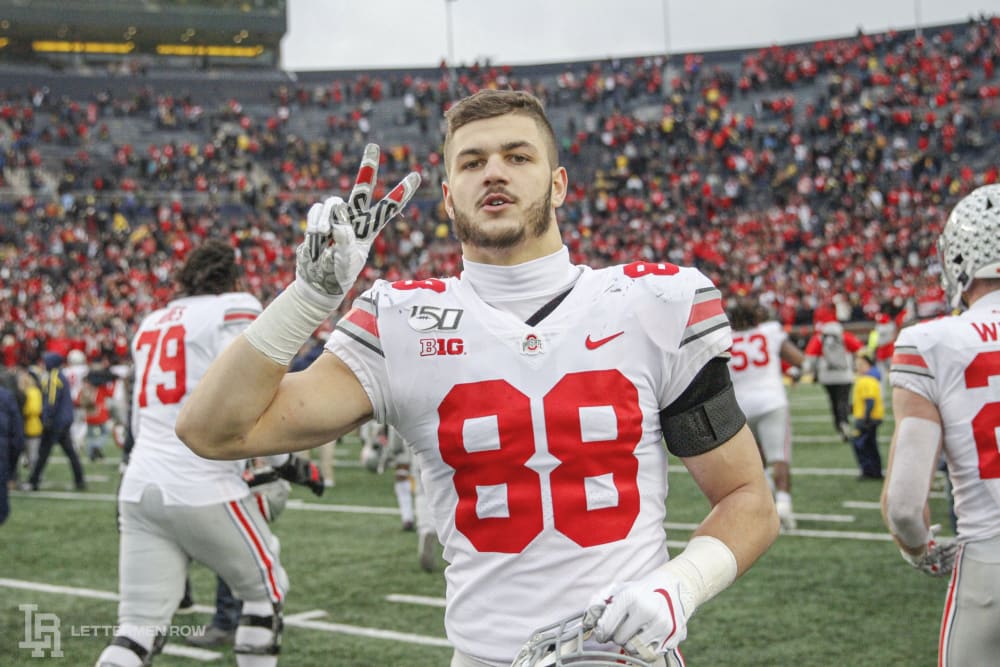 Farrell and Ruckert both fully understand that their primary duties are going to be as blockers, and they’ve got no problem accepting their roles. But both have proved several times this year that they can give Ohio State more than that as targets in the passing attack, and it shouldn’t be a surprise at all if the tight ends wind up playing key roles in the College Football Playoff starting in the semifinal against Clemson.

â€œArguably it was [my] best catch, but obviously I havenâ€™t had too many,â€ Farrell joked. â€œIt just kind of takes me back to high school, because I donâ€™t get balls like that very often.

â€œTo me, itâ€™s not even about a great catch it was or what people were saying or even if people thought it was lucky. Itâ€™s just about being able to prove that Iâ€™m reliable. Like when [Justin Fields] needs me, Iâ€™m there. Itâ€™s the same thing when I had the catch earlier when we were trying to go tempo, I take pride in that just as much as a touchdown catch.â€

The tight end tandem has now combined for six scoring catches this year, and clearly they’ve got a knack for delivering in tough situations. There’s no certainty that more opportunities are coming for them next week in the Fiesta Bowl, but it’s obvious that both Farrell and Ruckert are ready and willing to lend a good, strong hand.

What makes Luke Farrell and Jeremy Ruckert so valuable to the Ohio State offense? Who had the better one-handed touchdown catch for the Buckeyes? How much more could Ohio State use the tight ends during the College Football Playoff? Former Ohio State tight end Jake Stoneburner was back in the Lettermen Row film lab looking at the highlights for those two guys and answering those questions in the latest episode of BuckIQ.