COLUMBUS â€” Being in the same Ohio State recruiting class as Jeff Okudah, Shaun Wade and Kendall Sheffield meant it was going to be easy for Marcus Williamson to get overlooked.

That trio of 5-star prospects was always going to get the spotlight and the chance to shine early and often. That doesn’t mean it was going to be easy for him to deal with it.

It was also not easy for Williamson, a 4-star prospect from Westerville who played his senior year of high school at the IMG Academy in Florida, to lose recruiter and position coach Kerry Coombs before ever playing a snap and being forced to deal with two different defensive back coaches in his three years at Ohio State.

Or to deal with a number of nagging injuries that prevented him from valuable playing time over the last three seasons.

Now, Coombs is back and Williamson is trying to find the silver lining in an Ohio State career that has been full of rain storms.

“I’ve had, every year it seems, some changes in our coaching,” Williamson said Tuesday night. “Guys move up, move on to the next level or what have you. I think, you know, with all that coaching has brought so much knowledge, different techniques and styles that I’ve been able to bring, and utilize on the field, and now that Coach Coombs is back, it’s really rejuvenated me.

“You know, it has kind of reminded me of why we come here. We come here to win championships and to get to the next level. Coach Coombs preaches that every day. We’ve had that relationship really since I was 15 when he started recruiting me. It’s great to have him back.” 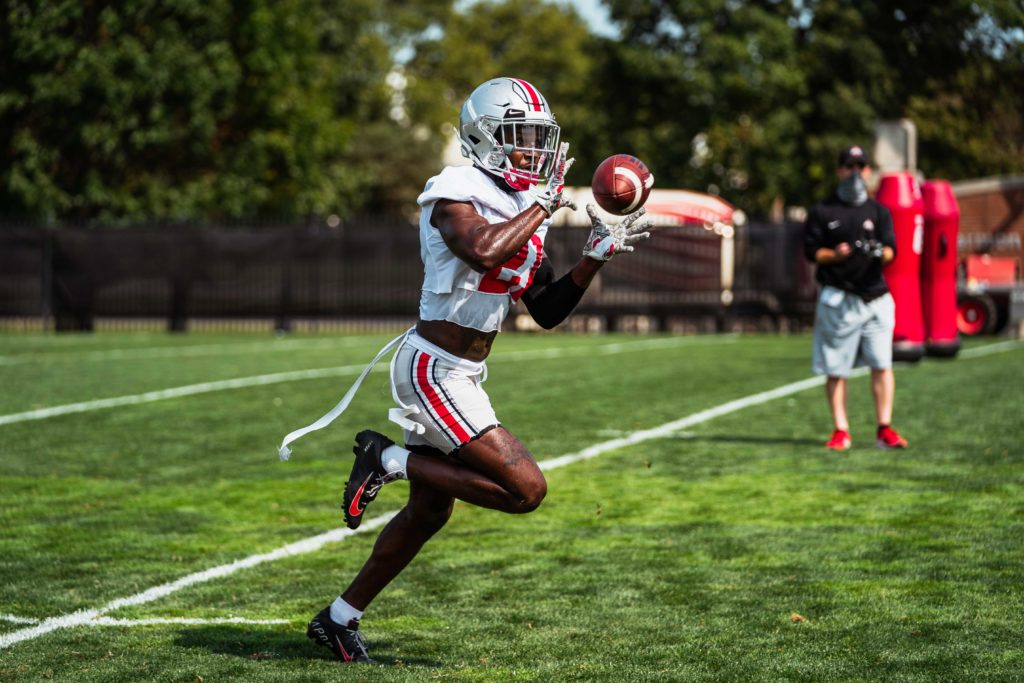 The return of Coombs means that the 5-foot-10, 185-pound defensive back will get a chance to meet the expectations he had for himself when he picked Ohio State more than five years ago. Coombs has no doubt that Williamson can do that, even if he’s not been to that level yet. And that’s one reason the Columbus-native is positioned well to be the go-to guy in the always important slot/nickel cornerback role for the Buckeyes this fall.

When coaches change and injuries pile up, players like Marcus Williamson often get lost in the shuffle. The biggest challenge with a series of physical breakdowns is often the toll it inflicts on a player’s mental state. The lack of playing time and opportunities leads to waning confidence and that leads to transfers or worse. That’s how Williamson’s career could have gone.

Instead, he’s been buoyed by the confidence that Coombs still has in him and has developed as a leader in a defensive backfield that desperately needs one.

“Coach Coombs, he understood that my career here hasn’t been ideal or hasn’t been perfect for myself,” Williamson said. “But he’s brought that new sense of energy and he came in the first day and he told me: ‘You’re still the same player that I recruited, let’s get to work.’ We’ve been making extreme strides since he’s been here.

“I came in pretty much injury-ridden my first couple years. Anybody that goes through injuries, you’ve got the great stories here [at Ohio State], Johnnie Dixon, Justin Hilliard, these great stories of comebacks — and luckily I haven’t had these major, like an Achilles or knees, but I’ve had my struggles. Having this year, this extra year, it’s given me a new life. I’m so ready to help this team and help us win. That’s really the driving force behind it now that I’ve stepped into a leadership role. …I’ve done a lot of waiting.”

The wait could be over for Marcus Williamson. It couldn’t have come at a better time for Ohio State.