LOS ANGELES — The transition from Urban Meyer to Ryan Day is nearly here, and Ohio State isn’t worried about the future at all.

The Buckeyes on offense who have spent the last two years working with Day are confident in the man who will soon be leading them.

“I think heâ€™s going be a legendary coach like Coach Meyer,” sophomore tailback J.K. Dobbins said Saturday morning.Â “Heâ€™s a winner. Heâ€™s driven. Heâ€™s an energetic coach as well. I just think he has all the tools to be a great coach.”

Day’s three-game audition gave Ohio State a glimpse into what Day is capable of as the leader of the program. But it didn’t tell the whole picture of who he is on the field. There’s no doubt the 39-year old is different than the man who will be his predecessor, but there are similarities as well.

“Everybody has a different way about them, but Coach Day is pretty intense — you guys must not be watching close,” Dobbins joked. “He doesnâ€™t look as stressed, but if you mess up something in practice, or go the wrong way in practice, heâ€™s fired up.

“Heâ€™s all about being great.”

Redshirt junior receiver K.J. Hill saw enough to feel the Ohio State program and offense will continue to move in the right direction under Day. Meyer has taken his young assistant under his wing even more than usual in the last month preparing for the soon-to-be transition.

“I feel like there’s not going to be a drop-off,” Hill said. “You just see [Meyer] teaching him the ropes, kind of. Coach Day walks around with him at practice and they’re always talking. He’s showing him how it’s going to be. What to do, everything like that. Coach Meyer is doing a good job with him.

“[Ryan] Day has handled it great. He knows he has big shoes to fill at a big-time university. I feel like he’s been all ears. No talking.” 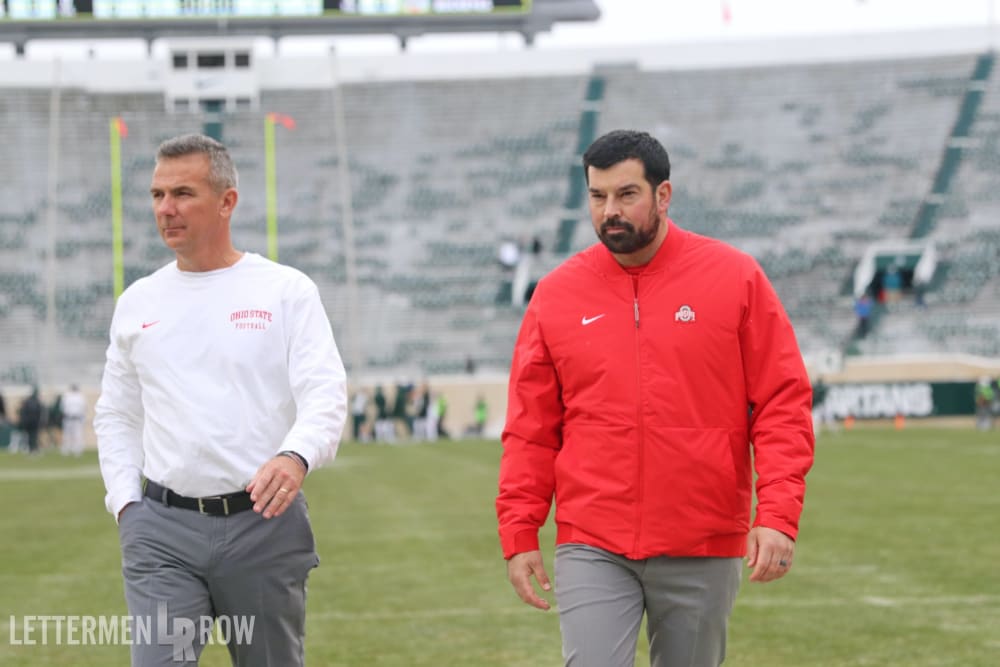 Urban Meyer and Ryan Day have spent a lot of time focusing on the Buckeyes coaching transition. (Birm/Lettermen Row)

Day has never avoided taking on the pressure of the Ohio State, and heÂ once again addressed it directly on Saturday by choosing to focus on what has remained the same as opposed to all the change that’s ahead.

“It’s not been different at all. It’s been really smooth,” Day said during the morning’s press conference. “There’s a great relationship there between Coach and I, and he’s kind of handing this thing off to me as we go. But things have been business as usual, and we’ll continue that way through the game.

“I do think that you have to make sure you’re forecasting a little bit where you’re headed. So staying focused on the game right now and then once that happens, go from there.”

The next game is what matters the most to Day, Meyer and the Buckeyes. It has to, or there’s a chance for things to go off the rails. That laser-focus is the biggest similarity between the departing coach and his successor.

“They love winning so much they will literally do anything to find a way to win that game,” right tackle Isaiah Prince said. “I think thatâ€™s what they have in common. The thing theyâ€™re kind of different on coaching styles. Coach Meyer is hard-nosed, tough. Coach Day can be playful, put a smile on his face â€” itâ€™s just two different types of energy.

Ohio State offensive players and Ryan Day talkedÂ with the media on Saturday morning in Downtown LA. Video interviews with Dwayne Haskins, J.K. Dobbins, Isaiah Prince, K.J. Hill, and Michael Jordan will be posted here and can also be found on the Lettermen Row YouTube channel.