One rep during Sunday’s Under Armour Camp Series stop in Columbus underscored the uncertainty almost perfectly.

Styles lined up about ten yards away from his competitor, a wide receiver. It’d been drizzling for about an hour but the rain was heavier at that moment than it’d been all day. Styles back-pedaled neatly, keeping inside leverage on the wideout who broke the route off toward the sideline, creating a bit of room for the catch. Styles had been slipping on the turf a bit, his brand new Under Armour cleats not handling the slick field as well as he’d like.

In a flash, the 6-foot-4 athlete closed the gap. His fist found the ball, knocking it loose while his 210-pound body collided with the receiver, taking them both to ground.

Another rep he took he gave up a catch. He came back to the huddle muttering under his breath.

“I hate when they catch the ball,” he said to himself. “Hate it.”

That drive for perfection is what will separate him on the field no matter what he’s doing. He just doesn’t know what he’ll be doing yet. No one really does.

Is Sonny Styles a safety? Is he a linebacker? He could be either, he could be both. No matter where he plays, he’s going to be a problem for offensively-minded folks.

Ohio State knows he can do that, too. So does Notre Dame. Michigan. Michigan State. LSU and others. Styles is a Buckeyes legacy but by the time his recruitment really ramps up, he’ll be a young prospect with offers from everyone in the country. After sitting idly by, he’s ready to get on the road and see what schools have to offer. 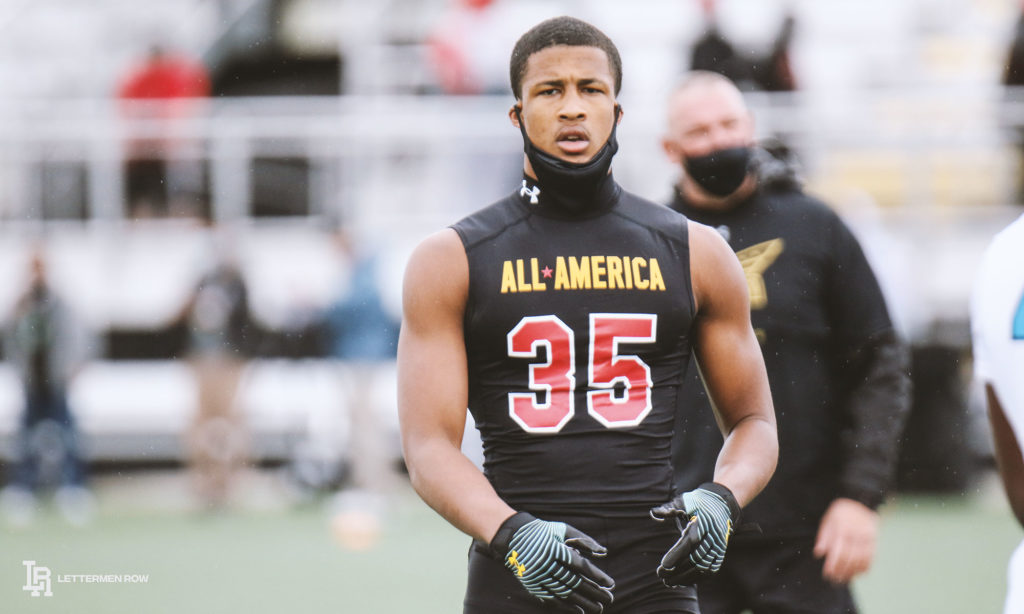 Sonny Styles has the body of a linebacker and the skills of a big-time safety. (Birm/Lettermen Row)

“I don’t have any set dates but I’m gonna try to get as many schools I can,” Styles said. “Schools like Ohio State, Notre Dame, Michigan, Michigan State. My dad is close to one of the coaches at North Carolina, Dre Bly, so I’m going to go there, see an old friend. I’m going to try to go see as many as I can.”

“I don’t really have any favorites right now,” he said. “I’m not really sure what my top schools are right now.”

But ask about why he likes the Buckeyes and Fighting Irish and the responses come free and easy. Any other school evokes a pause, a little deeper thought.

“I really like how [the Buckeyes] preach like, brotherhood. I like that when I talk to Coach Day, he talks about everything you do is like ‘that extra two.’ Just putting extra into everything that you do.”

Styles also really likes Al Washington. The Buckeyes have made him a priority since last August and it’s been Washington leading the way.

“I talk to Coach Washington a lot,” he said. “He’s always telling me to just keep working, to stay hungry. I’ve been talking to him the most, since August or something. As soon as I had my first game [as a sophomore] he pulled the trigger. I know he believes in my abilities. He believes in me a lot.”

Whether he’s a safety or a linebacker, it’s easy to believe in the ability of Sonny Styles. It’s fully on display each and every rep he takes.

And he’s only going to get better.