COLUMBUS — Sydir Mitchell arrived at Ohio State with a plan.

The four-star defensive lineman in the class of 2023 held offers from Michigan, Texas A&M, Florida State and USC before his arrival in Columbus on June 15. But none of the offers came from legendary defensive line coach Larry Johnson. That’s what makes the Buckeyes the difference maker, and why the prospect traveled from New Jersey just to showcase his talent and earn a scholarship offer.

But Mitchell’s goal of leaving Ohio State with an offer fell short. The 6-foot-6, 340-pound defensive tackle hyperextended his knee during bag drills, forced to sit out the remainder of positional workouts and the crucial one-one-one period.

“I was hoping to get down here and get offered,” he said after camp. “I really wanted to come down here and show them that I am Ohio State material and I can play. I felt like if I could have done more it would have been better.” 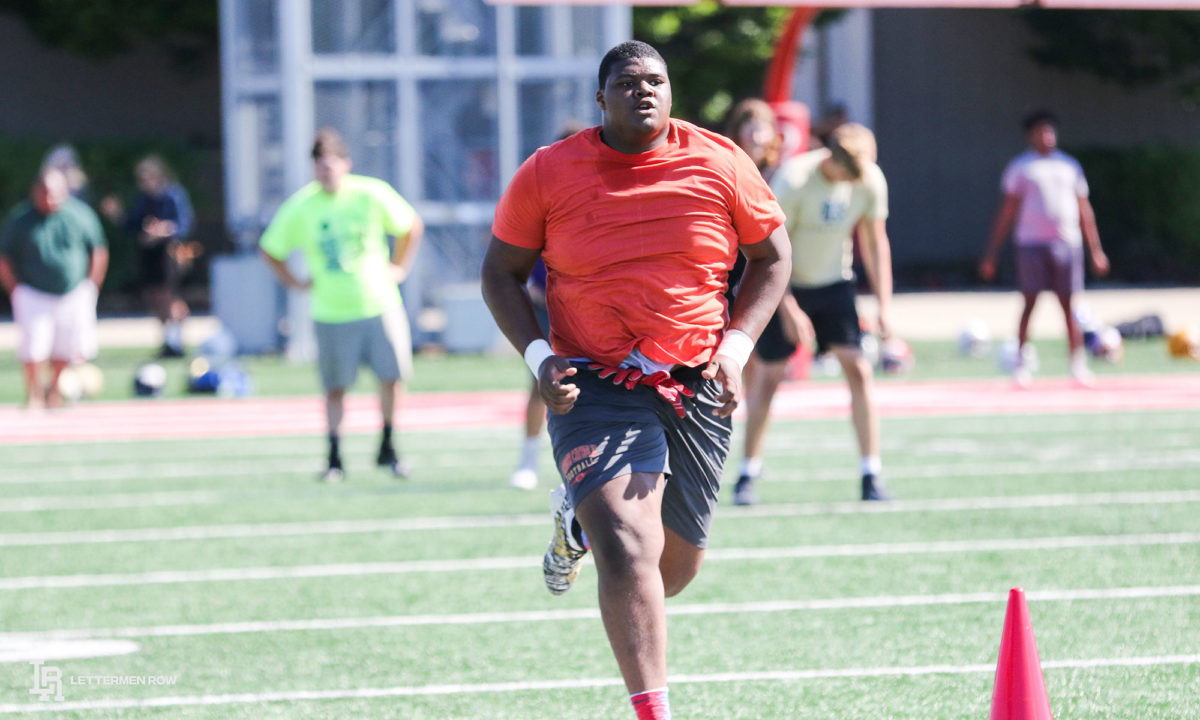 The second-ranked recruit coming out of New Jersey had been in contact with Johnson before camping with the Buckeyes. It had been Johnson who asked Mitchell to make the trip out to Ohio State, sending him flyer and starting the relationship with the No. 24-ranked overall defensive lineman in the 2023 class.

And for the most part of Mitchell’s June 15 workout, he did look the part of a highly-ranked prospect. With the length and size to be a problem at defensive tackle, he clocked an impressive 40-yard dash that suggested he could be a pass rusher, too. But the injury hampered any opportunity of walking away with an offer.

“I mean, for me, it’s not really good enough,” he said. “But I don’t know about the coaching staff. I felt like maybe if I did a little bit it more could have been better, but I feel like it was OK.

“I feel like I am a good pass rusher, but I feel like I didn’t really get to show it as much as I could last season with everything going on.”

Nicknamed the Big Dancing Bear, Mitchell moves well and also has the power to reach the backfield as a defensive tackle. The top-150 recruit did everything possible to set himself up for success at camps this spring. After totaling 32 tackles and 7.5 for loss this fall at Bergen Catholic (Ordell, N.J.), he worked to shed weight to add speed.

Ohio Still hasn’t added a commitment yet in the 2023 class, and in-state five-star defensive end Brenan Vernon just committed to Notre Dame. If Mitchell wants an offer from the Buckeyes, there’s still an opportunity. The first step is strengthening his relationship with Johnson.

Even though Sydir Mitchell still does not have an offer from Ohio State, he isn’t done working for one.

He’ll use the intensity and focus Larry Johnson showed him in a day of camp to continue improving until he earns an offer to join the elite group of Rushmen.