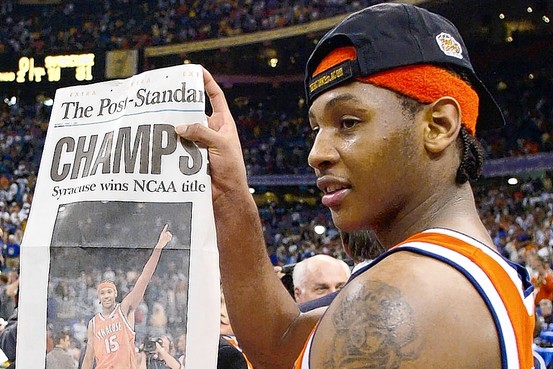 The city of New Orleans hasn't hosted a Final Four since the 2003 college basketball season. That was the year Jim Boeheim finally won college basketball's grand prize, and he did it with a young team led by the nation's best freshman, Carmelo Anthony, a one-and-done player. Flash forward nine years; the Final Four is back in the Superdome and John Calipari is staring down his first title, the final piece missing from his Hall-of-Fame-worthy resume. Like '03 Boeheim, Cal is one of the best coaches in the country but he needs the hardware. When Cal's team takes the floor tomorrow night, they'll be coming from the same locker room the Orange used in the 2003 NCAA championship game. Syracuse's opponent that year? The Kansas Jayhawks.