A Look at Today's Defense 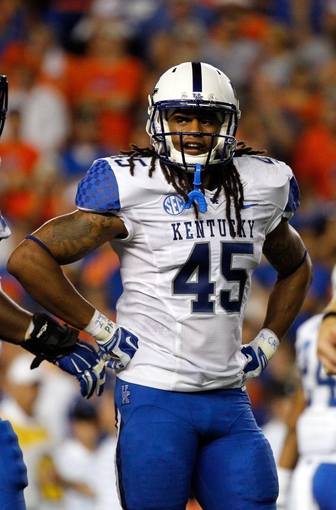 A heck of a lot of new faces flooded the UK practice fields today on the defensive side of the ball for UK. Replacing two of the biggest names from UK football one year ago, Bud and Z, will be hard, but from the looks of things it may not be as daunting as it seemed before. Let's get this recap rolling:

-Josh Forrest. This will be one of the 2015 defensive anchors, playing a very similar role again to what he played last year on Eliot's defense. Forrest had 110 tackles to lead the team a year ago, and returning with another year under his belt into a more important position as a senior linebacker this year, his impact will be felt this season undoubtedly. Forrest came up with two big picks and many assisted tackles into today's scrimmage, and played the part of a veteran that UK will need on the field next season.

-You're going to see some new production out of the defensive ends.  Farrington Huguenin did an exceptional job forcing the running backs inside, batting down a couple of passes as well.  Denzil Ware is coming into his own at outside linebacker off a redshirt season. Stoops said there were plenty of good teaching moments for Ware, who needs game reps to work out the kinks.  These are the people you will be seeing take over Bud and Z's individual positions, besides Jason Hatcher of course. They all played well today in the scrimmage and will be counted on heavily this season to create some pressure in the backfield and be knocking down some passes.

-Jason Hatcher is a man among boys on the football field. He once again came up with some big hits on defense today and looks ready for a big impact year next season. His overwhelming strength and speed make him the ideal #1 replacement at DE this season, and his contribution to the defense will be easily noticed next season. Look for his 28 tackles and 1.5 sacks in 2014 to increase ten-fold this year as a consistent starter on defense.

-The linebacker position had a nice day for UK today.  Other than a couple of back to back first downs, Boom Williams and the UK rushing attack were kept in check. Josh Forrest and Ryan Flannigan led the way, with Khalid Henderson making contributions during his time.  Dorian Hendrix was solid, recovering a fumble. The true freshman, Jordan Jones, has added a lot of muscle since his arrival while learning the position. . We still aren't sure if Nebraska transfer Courtney Love will be able to make it out on the field for this season, but he would be a huge get for a linebacker depth chart with many young guys without playing experience.

-Stamps will be the senior leader of this secondary group. He will be playing pretty much the same role he did last season, except this year he'll be surrounded with a more experienced group of corners. Experience at the safety position is a little young, but with returning safety Marcus McWilson, and newcomers Darius West and Mike Edwards, we should be alright so long as Stamps stays healthy since we often times leave one safety in the game and play nickel coverage. They all looked fine today out on the field. It'll be a great learning year for West and Edwards under Stamps, as well as Wilson, all of whom looked just fine coming in and out of the scrimmage today on nearly every play.

-Blake McClain is the star of the veteran-led cornerbacks on our team. He looked great today and is poised to have another big season for UK this year. As I mentioned before, Eliot loves to use him in the nickel and he did great things for UK last year in that position in numerous games as just a sophomore. Fred Tiller, J.D. Harmon, Cody Quinn, and Jaleel Hytchye will serve as the veteran group of corners alongside McClain this season. Expect these guys to be a much improved unit from a year ago, and I see better things coming out of this group than what we had going last year for us.