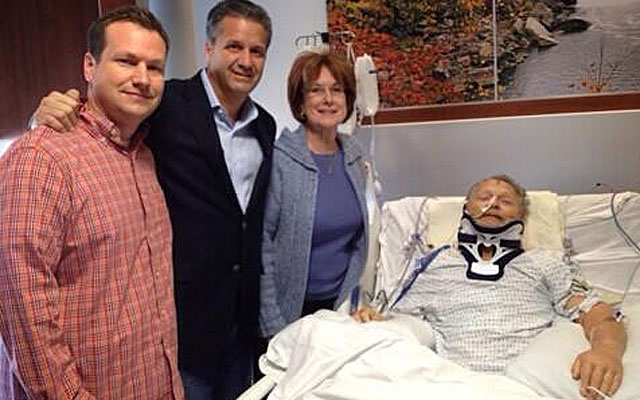 Ryan Clark, a freelance writer in Kentucky, sent us his story on Dickie Gregory, the 73-year-old man who fell in the upper level of Rupp Arena last season. Ryan wanted us to share it with our readers to update Big Blue Nation on Dickie’s current status…

â€ªFor the Gregorys, life will never be the same – and it’s a fact they know all too well.

On most days, Mary Alice Gregory gets up early. There’s paperwork to do — forms to sign and things to file away.â€¬

â€ªIt’s been that way since the accident. Insurance papers pile up if they’re not taken care of, she says. â€¬

â€ªShe sits at the table, in the kitchen of the home she shared with her husband. They’d spent 47 years in that South Louisville house. But her husband doesn’t stay with her anymore. He can’t. He’s now in the nursing home across town.â€¬

â€ªSo, Mary Alice walks through the bedrooms and makes sure the house is in order. “We’re selling it,” she says, “because he can’t live here anymore — it’s not accessible to him now. So you know, you have to keep it up in case someone wants to come by and look.”â€¬

â€ªThen, in the afternoon, she will head out to the car and make the drive, out on the interstate, down the back streets, until she’s there with him again. She’ll cut his hair or give him a shave, careful not to touch a hand or an arm, because even though he’s paralyzed he can still feel unimaginable pain.â€¬

â€ª”It’s something people don’t realize,” she says, “how someone who is paralyzed can still feel so much pain. It really goes along with spinal cord injuries — there’s a lot of pain.”

You probably remember hearing the story. National columnists wrote about it. People talked about how sad it was. Then, it seems, everyone went back to their normal lives: Thanksgivings, Christmases, and birthdays.

But the Gregorys can’t go back to their normal lives. They can’t forget, because life will never be normal again.

On Nov. 1, 2013, Dickie and Mary Alice Gregory attended the Kentucky- Transylvania basketball game at Rupp Arena. “It was my first game,”

Mary Alice says, “so we got there early, to look around and see everything.”

They’d been married nearly 50 years, and Dickie wanted her to enjoy her first time in Rupp Arena. At 73, he was an active retiree who played golf in a regular foursome and worked a part-time job. Friends always said he looked 20 years younger than his age. He also helped take care of Mary Alice, who at 71 suffers from Lupus and tires easily. They climbed to their seats — Section 238 — but before they got settled, Mary Alice stumbled, losing her balance for a moment. Dickie tried to catch her, and instead ended up falling himself, bouncing down seven rows of bleachers before stopping. Mary Alice was able to get up. Dickie didn’t move.

Dickie broke three bones in his neck, which paralyzed him from the neck down. He was taken to the hospital and UK Athletic Director Mitch Barnhart had to help Mary Alice find the family car. Dickie spent a considerable time in serious condition at UK’s Chandler Medical Center, where John Calipari and his team visited the patient from time to time.

Now, Dickie has been moved to a nursing home in Louisville. In the spring, after UK’s surprise run to the NCAA title game, Coach Calipari made a visit when he came into town for a booksigning.

Dickie’s nursing home room has now been redecorated for a Big Blue winter, with a UK Christmas tree, a UK snowman, a UK quilt and a poster of this year’s team — which he loves, by the way.

Even through it all, the Gregorys still watch the UK basketball games. It’s not like it helps them forget — that would be silly, because nothing could do that. But it helps. It’s a distraction.

“He was a very active man,” Mary Alice says. “I know this is boring for him. But he does love to watch this team play.”

Even after all he’s been through, nurses still say Dickie looks about 20 years younger than he really is. He turned 74 in October. Of course the biggest worry now is finances.

Mary Alice says Dickie is suffering from horrible bed sores, and that he needs the kind of bed he stayed in when he was in Lexington. He does not have that kind of bed in his current nursing home. They also need a house to put it in, so they need to buy a bed and sell their home.

Each day she comes home, exhausted from her own illness.

“Everything centers around him being in the nursing home and his care,” she says. “Getting him to doctors and for treatments. How are we going to financially do this? Everything is geared toward that.

“It’s just hard to explain,” she continues. “The other life we had — it’s gone and this is just another world.”

The Gregorys are currently spending their life savings, hoping to sell their house, go on Medicaid, build a handicap-accessible patio home, and move Dickie there, into a new bed. He’s still working through rehabilitation. He has learned to use his mouth to direct a wheelchair, although he’s out of practice because of his bedsores.

Mary Alice has help from her family, but it all takes a toll. She likes to thank all of those who have heard the story and shown support.

“I’m hanging in there, I guess,” she says. “I exhaust easy — it’s one of the classic symptoms of Lupus. Going along and trying to deal with everyday problems does tend to get to you. There are just so many prayers — I guess they’ve gotten me through this — I guess they’ve helped both of us.

“Everybody says they don’t see how we’ve done it,” she says. “Everyone says they can’t imagine — and you really can’t. You cry at things – there were months that I cried more than once a day, day and night, and at first I couldn’t even cry.”

Now she’ll walk into the garage and see his work boots — and that’ll make her cry all over again.

“It just broke my heart because he was so active,” she says. “There are phases you have to go through — it’s part of grieving, because you’re grieving over what you once had. I am getting better — I still cry at things, and when things go wrong with him and he’s feeling bad it really affects how I feel. When you’ve been married for 52 years, like the Bible says, ‘but one flesh,’ — when he hurts, I hurt.”

Earlier this year, there was debate among state legislators, the city of Lexington and the University of Kentucky as to what type of renovation should be done to Rupp Arena. Mary Alice has some advice for whenever those plans come to fruition.

“I think they need more railings — the part we were sitting in was real steep, and there were no chairbacks,” she says. “With no people there yet, and no chairbacks, there was absolutely nothing to stop Dickie when he fell.”

Dickie has spoken in interviews before, about how he wants to improve for all those thinking about him.

“He knows there’s a lot of people looking out for him and there’s people who depend on him and he doesn’t want to let them down,” Mary Alice says.

“Yes, sometimes you feel like giving up,” he says. Speaking can be difficult. But then he looks at the cards and well-wishes people have sent, people he’s never even met.

“You get to thinking about all those people who thought about you, and it makes you want to get better, not just for yourself, but for them,” he says.

In the evenings, which come quicker this time of year, Mary Alice will leave the nursing home, and makes the drive back to the south side of town.

“By the time I get home and take care of a few things, I watch TV in bed and by then you’re just too sleepy to do anything else,” she says. “It’s just too much to think about.”

But some days are better than others, she says.

“It’s true that on those days when UK plays, the pain seems a bit less, the hope a bit more,” she says. “He still loves this team and we still watch every game.”