Chad Lashbrook
Keeneland's fall meet opens this weekend with three excellent cards anchored by 10 stakes races that serve as important preps for next month's Breeders' Cup World Championships at Churchill Downs.  Friday's card features the Grade 2 Stoll Keenon Ogden Phoenix Stakes, a Win and You're In event for the Breeders' Cup Sprint, along with the Grade 1 Darley Alcibiades, which offers the winner a free ticket to the Juvenile Fillies at Churchill on Friday, November 2nd.  Despite the continuing summer weather, most pools closed about a month ago, so make every effort to get out and enjoy some outstanding racing this weekend. [caption id="" align="aligncenter" width="585"] 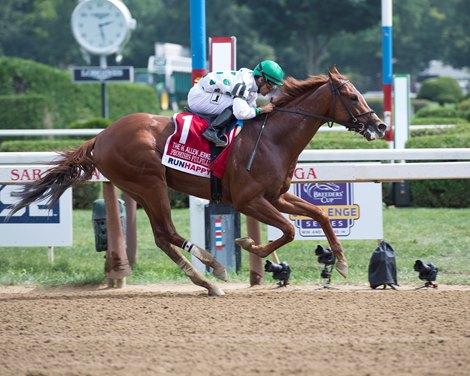 Promises Fulfilled takes the G1 Allen Jerkens at Saratoga. Photo courtesy of Bloodhorse.[/caption] This column has traditionally provided a simple summation of mostly stakes races with general opinions on how the race might unfold and who the primary contenders might be.  Several readers have reached out and requested more straight forward wagering opinions.  So, for this meet, I will be keeping a bankroll with specific bets for each day the column runs.  Maximum bankroll per day will be $100.  Ask and you shall receive - we'll see how this goes.  Wager at your own risk. Friday, October 5th - Race 8, The Grade 2 Phoenix Stakes A six horse field will line up for this 6 furlong opening day fall meet staple, but only half of them appear to be viable contenders.  Limousine Liberal will take plenty of money, and deservedly so, as he is closing in on the $2 million earnings mark for his career.  He finished a hard fought 3rd behind the re-opposing Whitmore last out in the Forego at Saratoga.  Just prior to that, he defeated Whitmore at Belmont.  Both those races were run at 7 furlongs, which is Limousine Liberal's preferred distance.  He is only 3 for 11 going 3/4 of a mile and just 1 for 6 at Keeneland.  He has burned money in his last two efforts over the Keeneland strip, finishing 2nd as the favorite in the Commonwealth Stakes this past spring, and 3rd in this race last year as the public's choice.  Whitmore won this race last year, by a nose, and enters this off a strong victory in the aforementioned Forego following two near misses at Belmont.  Promises Fulfilled is a 3yo making his first start against elders in this spot.  On the same day Whitmore won the Forego, Promises Fulfilled won the Allen Jerkens over the same track in identical time.  The son of Shackleford is the preferred choice in this spot because he has a distinct pace advantage.  He will set the pace from his rail draw, and may face only modest pressure from Distinctive B.  Six furlongs may ultimately prove to be his ideal distance, and he proved he can handle a tepid pace and still finish strong in his two races at Saratoga. Wager: $35 Win and Place on Promises Fulfilled Race 9, The Grade 1 Alcibiades This mile and a sixteenth test for 2yo fillies drew an overflow field of 16, 14 of which will start.  Restless Rider will likely go favored based on her runner-up finish in the Spinaway at Saratoga and an 11 length victory in the Debutante at Churchill.  Like many of these, this will be her first trip around two turns, and I'm more apt to take a wait and see approach on whether she will handle the added ground or not.  Into Trouble has two very professional victories to her credit and certainly ought to be respected in her first two turn trip.  Lady TNT owns two runaway victories following a debut where nothing went right for her.  She went straight to the front and never looked back in both those wins, and she will likely look to do the same here.  Distance is certainly a question as she has not been further than 6 furlongs and her sire Justin Phillip earned his keep around one turn as well, but trainer Joe Sharp boasts a solid 23% winning percentage when stretching runners out.  Catherinethegreat has thus far sandwiched two very impressive outings with two very subpar efforts.  She had a rough trip when 9th beaten 14 lengths in the Spinaway.  She adds blinkers for this and comes in with the fastest of 113 half mile works over the track this past Saturday.  Like Lady TNT, she has the speed necessary to gain a forward placing and negate potential traffic issues from the outset.  Chocolate Kisses is one of only two fillies in the race to have competed at this distance before, and she's done it twice.  She broke her maiden over firm turf at Saratoga and then took the show spot over yielding ground in the PG Johnson.  Shifting back to the dirt may suit her well, and she has proven stamina. Wager:  $0.50 trifecta box w/ Restless Rider, Into Trouble, Lady TNT, Catherinethegreat, and Chocolate Kisses Best of luck to all who choose to get involved on opening day.  Check back in this spot tomorrow for Saturday's column.  You can follow me on Twitter @chadlashbrook.