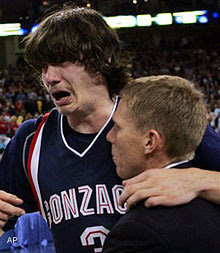 1. So Kentucky did alot more than reinsert itself back into the SEC title picture, they also saved some face historically.  Eric Crawford discusses the significance of the win in his Wednesday column. 2. What one word does John Clay use to describe the UK win: toughness. 3. UK now sits at 64 in the RPI.  Their losses are against VMI (133), UNC (7), Miami (42), Louisville (12), Mississippi (63), South Carolina (44), and Mississippi St. (77).  They now have 3 Top-50 wins on the season.  The last at-large team to get in last year by the RPI was Oregon, RPI 61.  They had 4 Top-50 wins at the end of their season, and lost 2 games to teams with a plus 100 RPI.  So, I thank that win over Florida puts UK back in the category of "control their own destiny".    4. Well, I think barring a complete collapse, we learned what two of the #1 seeds will be come March.  UCONN continues to just roll over anyone in front of them (excluding Georgetown, one of the more baffling losses this year), whipping Syracuse.  And UNC was quite impressive in dispatching Duke.  I would guess that Oklahoma has the inside track to another #1 seed, and the last one will be fought for by Pitt, Louisville, Duke, and Michigan St.  If you held a gun to my head, I would say Louisville would get it today.  But, out of those 4 teams, they had the worst non-conference season, so they are walking the most unsteady line.  5. Here are the 10 worst athlete crying moments. 6. SEC Recap: Auburn 75, Arkansas 62 LSU 97, Mississippi St. 94 2OT Tennessee 79, Georgia 48 (Keep this mind.  Georgia is 0-8 in conference.  Since the SEC went to 2 divisions, no SEC team has EVER won less than 2 games in conference regular season)