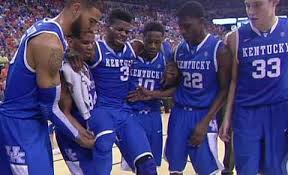 We don't know the extent of Reid Travis' injury yet and certainly it is possible it is minor and he will be back on the floor in no time as UK makes a run for the Final Four.  But in this time of uncertainty it is hard not to remember some of the other key injuries that have struck the Cats over the years.  As a younger UK fan, I don't remember the Sam Bowie injury or any other key injuries in the 1980's or sooner.  My mind immediately came up with 4 times an injury had a serious impact on a UK season in the last 25 years. And interestingly enough, sometimes you can actually take a positive away from injury.  I think a decent argument can be made the first injury below played a positive impact in UK winning the 1998 national championship.  Hopefully Travis is just fine and this will all just be a trip down memory lane for naught, but in the meantime look back on some key losses and which ones you think might have had the biggest impact: 1997: Derek Anderson Blows out Knee -Anderson, a potential All-American candidate, tore the ACL in his knee on January 18th against Auburn.  At the time, Kentucky was 16-2 and ranked 5th in the country.  The injury could have, in theory, cost the Cats a national title that season.  But the reality is Anderson going down had a positive effect on three players: Allen Edwards, Cameron Mills, and Ron Mercer.  Nobody saw a jump in minutes after the Anderson injury than Edwards.  He went from around a 20-minute a night player to closer to 30.  He was forced to take on a serious role with the team and stepped up in a big way.  And you could argue it help lead to what we saw from Edwards the next season, when he was a key cog in a national title.  Mills barely saw the floor before the Anderson injury.  But the opening in minutes allowed him to get a sniff of 6-10 minutes a game and prove he deserved those minutes.  Mills went on to hit big shots for the 2 years.  And Mercer was already a star but he was forced to become an All-American from that point forward.  Mercer took the reigns of that team and nearly led them to a title. 2003: Keith Bogans Sprains Ankle in Sweet 16 -Tough to say but Bogans was clearly limited in the Elite 8 game against Marquette.  Would it had made a difference against a red hot Marquette team?  Hard to say.  But when your All-American is playing at maybe 50%, there has to be some kind of impact.  The UK defense, anchored by Bogans and the best in the country, was sliced and diced by the Eagles and saw a premature end to the UK season. 2013: Nerlens Noel Blows Out Knee -Noel hurt his knee at Florida on February 12th.  The Cats were 17-6, ranked 25th in the country, and comfortably in the tournament.  In fact, UK went into that game on a 5-game winning streak.  The injury completely decimated that team.  From that point on UK went 4-6, missed the tournament, and experienced a couple of the most embarrassing losses in the Calipari era.  The hope was Willie Cauley-Stein would step up but WCS just wasn't ready for that role.  In fact, nobody was able to fill the void.  Archie Goodwin tried but wasn't up to the task. 2015: Alex Poythress Blows Out Knee -Poythress was hurt during practice on December 11th with the Cats rolling as the #1 team in the country.  While the impact of the injury was not immediately obvious because that team was so stacked with talent, it came back to bite UK at the worst possible time.  Poythress was UK's best perimeter defender and in the Final Four he would have been a perfect matchup with Sam Dekker.  Without him, Dekker proved to be the difference in the game.  So sometimes the injury doesn't show its true impact until weeks or months later.