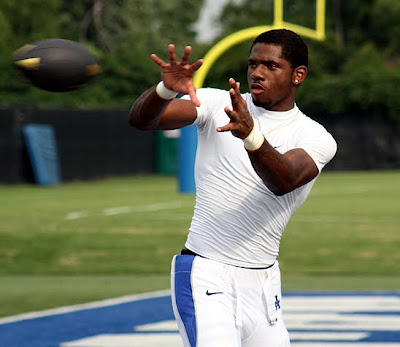 Who is to blame for UK giving up 42 points Saturday?  I look at Hartline, Cobb, and Matthews. Let's get a couple things out of the way before I get into Saturday's defensive performance.  First, the defense is clearly the weaker of the two units on this Kentucky team, and I fully expect there will be a loss or two this season that can be pinned on the defense.  I am extremely critical of the vanilla style of play, lack of blitzing, and poor tackling from this defense.  And I am amazed at how the people that were supposed to be the studs of this defense (cough...cough....Evans and Lumpkin) have not stepped up. BUT, the criticism leveled against this defense from Saturday's game is not backed up by actually watching the game, or the stats that accompanied the game.  There is one stat and one stat only that looked really bad:  42 Points.  And it is WITHOUT QUESTION that 28 of those points were seriously caused by offensive turnovers and special teams.  It I said the defense gave up 14 points on Saturday, what would you say?  Now, I will fully admit that is the stat that matters most, but at least against Ole Miss, those points should not rest squarely on the shoulders of the defense. Here is the Ole Miss Drive Chart from Saturday: 1st Half -3 plays, -1 yards, PUNT (1:25) -8 plays, 30 yards, PUNT (1:35) -3 plays, 11 yards, TD (1:19) -5 plays, 21 yards, PUNT (2:26) -2 plays, 9 yards, TD (:27) -5 plays, 43 yards, TD (1:53) -3 plays, 0 yards, PUNT (1:40) -3 plays, 9 yards, PUNT (2:34) 2nd Half -8 plays, 75 yards, TD (3:22) -9 plays, 60 yards, TD (4:30) -2 plays, 7 yards, TD (:52) -3 plays, 2 yards, PUNT (:13) -3 plays, 2 yards, PUNT (N/A) -4 plays, 16 yards, PUNT (N/A) -10 plays, 32 yards, END OF GAME (1:34) So, let's recap real quickly what all these numbers say: -In 15 Ole Miss drives, they had FIVE 3-and-outs, and another TWO drives that lasted 5 or less plays -In the first half, UK only gave up 132 yards total, including 5 punts in 8 drives -All 3 Ole Miss 1st half scores came off UK turnovers in their own territory -UK held Ole Miss to 3-minute or less drives 13 of 15 times -Excluding the first 2 drives of the 2nd half, UK held Ole Miss to 191 yards on 54 plays (3.5 yards per play) -Ole Miss had a TOTAL of 90 passing yards for the game Kentucky gave up 301 TOTAL YARDS on Saturday.  Wanna see what the other SEC teams gave up: Tennessee: 434 yards (LSU) Ole Miss: 424 yards (KENTUCKY) Georgia: 393 yards (COLORADO) Vanderbilt: 375 yards (UCONN) Mississippi State: 330 yards (ALCORN STATE) Alabama: 281 yards Florida: 273 yards Auburn: 270 yards LSU: 217 yards 10 SEC teams played on Saturday.  Kentucky's defense ranked 5th in yards given up.  Look at the teams who gave up MORE yards than Kentucky and look at their opponents.  Not exactly a murderers row of opponents.  Point being, Kentucky's defense played pretty good, but was doomed by the offensive mistakes.  The Kentucky defense played good enough to win in Oxford, but was doomed by poor field position.  And the Kentucky defense played good enough to have the fanbase off it's back for at least one week.  But most people have already made up their mind on that.