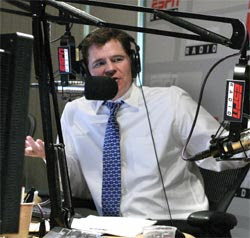 Coach Cal is making his national rounds again today, stopping by and talking with Dan Patrick (or, as Steve Beisner still calls him, Dan Pugh) on his radio show. Coach discussed a number of things, as he tends to do when making these appearances. However, he surprisingly had something to say this time, saying John Wall wants to stay at UK, Duke should not have been a one seed and that Mississippi State should be in the tournament. Coach Cal didn’t really complain about the road ahead of his team, believed by experts to be tough, but did say that having a team that was topping the polls a few weeks ago at the #8 seed is a little frustrating. All in all, a good interview with Cal. Check it out here.