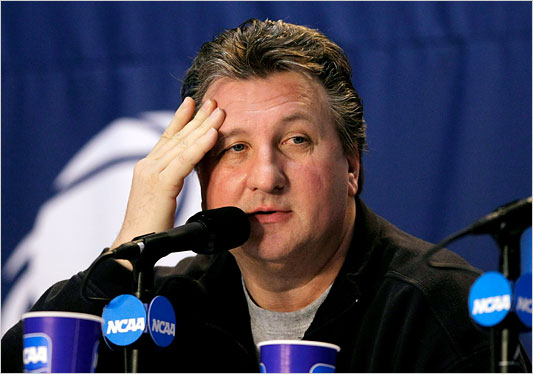 Kentucky head coach John Calipari and West Virginia head man Bob Huggins will forever share a common link: Huggins' heart. Not his innermost feelings and emotions, but his actual, physical heart. In 2002, Huggins suffered a massive heart attack at a car-rental office in the Pittsburgh airport. In the ambulance on the way to the hospital, Huggins discovered that one of the attendants was actually John Calipari's cousin. In the ambulance, Huggins recalls to Brett McMurphy of FanHouse.com: "And his (Calipari) cousin was the guy in the ambulance. And there was a couple of things that went on. But basically what he said is 'We're not going to let you die until John beats you at least once.' " At that time, Calipari at UMass and Memphis had never beaten Huggins at Cincinnati. Calipari finally defeated Huggins on March 1, 2003. After that, Huggins defeated Calipari two more times, in 2004 and 2005. In other words, Huggins has owned Calipari on the basketball court (7-1 against the UK head coach). Tomorrow will be their first meeting as coaches at West Virginia and Kentucky. My early prediction: Kentucky wins 71-68 Some early storylines to keep an eye on: - Calipari vs. Huggins - The loss of WVU's "Truck" Bryant at the point guard position - Can either team turn their shooting woes around? - Who can stop DeMarcus Cousins? - First Elite Eight appearance for Kentucky in 5 years Stay tuned as we shift all focus to tomorrow's huge East Regional final...