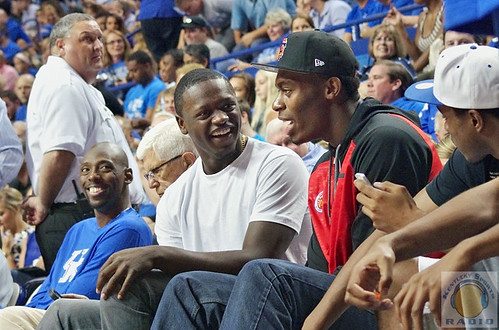 Chad Ford has a new 2014 NBA mock draft up over at ESPN.com and there is a heavy Kentucky presence in his first round projections. Ford predicts seven Wildcats will hear their names called in the first round next summer, beginning with Julius Randle to the Phoenix Suns with the second overall pick. Ford says Randle "possesses virtually every attribute scouts look for in a prospect." He called him "the type of versatile 4 that most teams covet." Here are the seven: 2.) Julius Randle, Phoneix Suns 7.) Andrew Harrison, Milwaukee Bucks 12.) Willie Cauley-Stein, Portland Trailblazers 22.) Alex Poythress, Memphis Grizzlies 24.) James Young, Boston Celtics 25.) Aaron Harrison, Phoenix Suns 27.) Dakari Johnson, Chicago Bulls Seven potential first-rounders on one team. Seven. Go Cats.