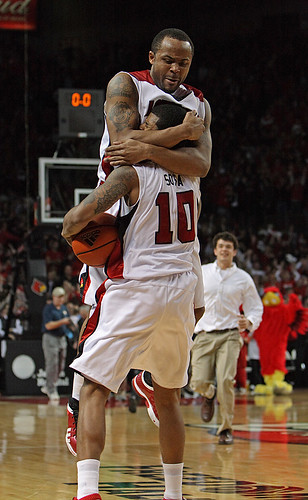 pic via here, found here. You don't wanna see the set. Trust me. I may be alone here, but does anyone else think that someone---Patterson, perhaps---should have lit-up the overzealous Lee Steiden (the street-clothed one) after Sosa's three dropped with 2.Ican'tbelievethatgarbageshotfell remaining? In doing so, wouldn't Steiden have been T'd up? Live and learn, I guess. Obviously, I'm jesting (kind of...not really, though). Regardless, and I hate to revisit this so soon, but there were some definite positives evident by game's end. First of all, Gillispie's goal has been reached: This team is super tough. Apparently, I'm some sort of masochist, because I've watched and re-watched the highlights from yesterday's game several times, and a team with lesser mental fortitude would've folded and gotten destroyed. If not after the 12-0 run following Gillispie's technical, then definitely when it found itself down 7 with mere seconds remaining. And we damn near pulled off the Duke-over-Maryland-esque comeback, due mostly to our resolve, with an assist to their ineptitude. This team doesn't quit, and, damn it, doesn't that count for something? After the, you know, ugliness, I stared at the floor for, like, 35 minutes. It gave me a chance to think, and hate, mostly hate, but it eventually led to an epiphany: these teams are headed in opposite directions. Louisville deserved to win yesterday, no doubt. They shot the ball better than they have all year, and T-Will and Sosa played great. They earned it. You can't expect to go on the road and turn the ball over 20+ times and beat a good team. However, we almost did. If anything, that shows the amount of heart and determination embedded in this team. It showed something else, too. Louisville's not very good. Or smart, but we already knew that. They entered the season ranked in the top 5, armed with more talent than Pitino's ever had at UL. They had a top-ranked recruit; a couple lottery picks; and a stable full of shooters that could keep them in any game. However, something happened. The season started. Now, at the season's midpoint, Louisville has a center who can't catch or play defense; a disinterested forward who refuses to play to his strengths; an overambitious slasher that is waaaay too in love with his jump shot; and a cadre of shooters and ball-handlers who just can't cut it on the big stage. Worst of all, they're hydroplaning into Big East play, with all their inadequacies in the open, and they can't feel too great about how the game went yesterday. Pitino has a way of making his team's play their best ball in March; however, I don't see them competing with Pitt or UConn or Notre Dame or Georgetown on a consistent basis. We, on the other hand, enter conference play pissed off. We could've won that game, but we didn't. We fought all the way back, and fell short. As a team, we will be hungrier than ever. Furthermore, we're only going to get better. Another scorer will emerge, whether it be Stevenson, Miller, or Liggins. Or, hell, Porter. No matter who picks up the scoring slack, we have a soft conference schedule and a team that looks ready to dismantle their weaker opponents. The turnover situation is alarming, but that may have had a lot to do with the atmosphere. At least that's what I'm telling myself. I guess this was just a long and convoluted way of saying that I think we're coming together at the right time, while they are in disarray. This game had blowout tagged to it from the moment the UNLV game ended. You knew they couldn't play that flat twice in a row on their home floor. Still, we battled, pushing them to the brink, and they won on an amazing shot that I would've been happy with them taking 1,000,000 times out of 1,000,000. OK, 999,999 times.