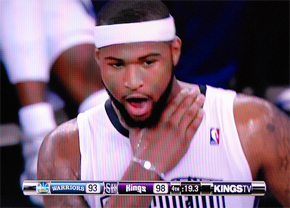 On a day where ESPN's David Thorpe declared that he's "starting to get it", former Wildcat DeMarcus Cousins was benched and fined after a choke job gone wrong against the Warriors.  Unfortunately for the Kings and Boogie, not only did Cousins dish out the choke body language - which I'll go on record and say I love - but he and his teammates then choked away the game themselves and lost in overtime.  Umm, Boogie, not a good look.  Here's the footage: