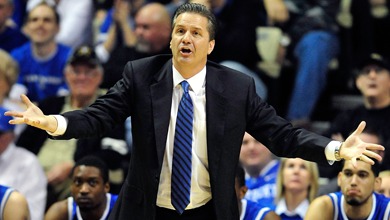 Haters gonna hate. We've all moved on with our lives from Friday's "Biggest Perceived Cheater" poll on CBSSports.com, but it's worth bringing it back for just a minute or two this morning to read Mike DeCourcy's thoughts over at Sporting News. Instead of taking the common approach and calling out the Jeff Goodman Band for raising the question, DeCourcy says the coaches who participated in the poll should be ashamed of themselves.

It was downright tacky for coaches to respond to the question about the “most overrated coach,” particularly when the largest number of them proposed it was North Carolina’s Roy Williams, who has won two NCAA championships, reached seven Final Fours and earned induction into the Naismith Memorial Basketball Hall of Fame. It was catty to answer at all, and silly to suggest him, but there was no great harm done. In this case, however, hiding behind an anonymous survey to defame a competitor demonstrates once again that even though college basketball coaches do a wonderful job of teaching the game, they do a horrific job of promoting it. ... It’s the coaches who responded to the most salacious of the questions who ought to be ashamed, and hardly for the first time.

36-percent of the 100 or so of the coaches polled said Calipari is "perceived" as the biggest cheater in college basketball. Of those 36-percent, it's fair to assume they're just bitter over the success Cal is having at Kentucky. I bet most of them have a lost a recruit or two to Cal over the years. Haters gonna hate. Cats gonna Cayt. [Sporting News: Coaches who voted in survey about "perceived" cheating should be ashamed]