In what has become a recurrin theme of the John Calipari tenure at Kentucky, the Cats are poised to again have the top recruiting class in the nation for 2011.  Today, the four players that make up the latest star class will ink their letters at their respective schools and, in doing so, provide more hope that banner number eight is in the near future.  It also means that you're going to get a steady dose of Scout.com's recruiting maven Evan Daniels, who has plenty to talk about on this busy day of his Kentucky Sports Radio radio appearance.  Here is what Daniels is saying about Kentucky, who is tagged with this line on Scout.com: "Wow! For the third year in a row the Cats are at the top of the list. Three players among the top six and another five-star prospect is as good as it gets." Calipari Has Cats Back On Top Top 25 2011 recruiting classes SEC is the top conference, Kentucky its top team Signing Day Superlatives - UK has best frontcourt, top pro prospect, best ball handler -------------------------------------------- And, just in case you forgot who UK is signing today, here's a refresher:

Marquis Teague Teague is a 6'2" point guard from Indianapolis, currently rated by Rivals as the nation's second overall player. Teague, whose brother is a point guard from the Atlanta Hawks, gave a verbal to the Cats in April. Before taking his place in the lineage of great Calipari point guards, Teague will be a feature witness for the state in Rick Pitino's next prominent courtroom appearance, which will center around the mysterious disappearance of Shabaka Lands.

Michael Gilchrist Gilchrist has long been regarded as not only the best player in the class of 2011, but many felt he was the best player in the country as a junior. Rivals currently has him as the third-best player in his class, which either means they're idiots, or choosing to spend his summer chasing his dream of being the nation's top-ranked Halo 3 player hurt his stock. He is believed to have been a Kentucky lean since his conception. 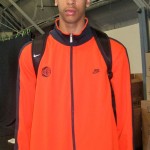 Anthony Davis After making a late charge after the top spot in the rankings for the class of 2011, Chicagoan Anthony Davis settled in nicely at #6 overall. The power forward was only 6'1" a year ago and was measured at a camp this summer at 6'10". This should make him easy to spot at Rupp. He'll be the guy who is 8'4". He also recently cancelled a subscription to the Chicago Sun Times.

Kyle Wiltjer It's not surprising anymore when Kentucky lands big-time recruits. But, landing Kyle Wiltjer, who committed without even visiting campus, was one of those pleasant gifts on par with coming home from work and finding out that your wife and kids have gone away for the weekend. And they stocked the fridge full of beer and charged up your PS3 controller. Wiltjer brings a versatile game at the "4" spot and got familiar with the creepy middle-aged men who will now stalk him as a Kentucky player when Cougar Town star Josh Hopkins showed up to watch him commit.