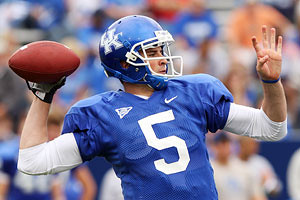 Here is the thing about my posts: Until we kick off the season, you are getting nothing but football from me. I'm too excited about the dawn of the Joker regime and I can't wait for the season to start. I'm simply full blown football stupid at this point, so much so that I am watching pre-season NFL games until the end, horrible pre-season highlight shows (I'm looking at you CBSC), and spending the rest of my time micro-managing our Fantasy Draft party (Chicken wings or BBQ? THESE DECISIONS HAVE TO BE MADE WELL IN ADVANCE!). There is a lot of information out there so let's run through some of the UK pertinent items: 1) Mike Hartline was profiled in a story by WLEX's Alan Cutler where he reacts to the decision and talks about maintaining a thick skin (if he needed to maintain a thick gut, Claude Bassett is but a phone call away). According to the article, Hartline isn't the people's choice (and really, nobody can follow The Rock, right?) and asks whether there has been a UK football player that was so disliked. Apparently they missed the whole Jeff Speedy era. Personally, I'm not a Hartline hater and think certain coaching strategies and the WR core (I've always said Craig Yeast was more important to UK than Tim Couch) deserves more of the blame for Hartlines underwhelming performances, but now Mike is down to his last shot. If we start out with an 'L' against the 'ville and don't light it up the next two games, it will be curtains for Hartline. 2) Joker wants to be a presence in Louisville according to the LCJ. I found it interesting that Joker said:

"To Win the state, you've got to win Louisville."

That might be true, but I think we are overdue for one of those awesome tight ends from the Danville/Boyd County area that are missing as of late. Guys like Chase Harp and Jacob Tamme that can act as the pressure valve as well as block a few pass rushers and help out our QB. 3) ESPN has an entire article talking about the new importance of the unofficial college visit. In it, they mention Joker Phillips and he has some choice quotes:

"I dropped what I was doing. It's that important. You may only have them on campus one time and you want them leaving with a great taste in their mouth about your school."

Rick Pitino feels the same way about basketball recruits, but you don't even wanna now how different his methods are from Joker's. Football is coming. Go Cats.