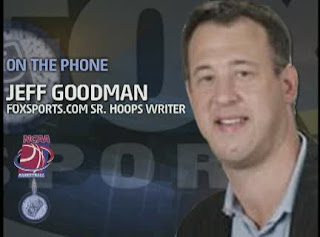 We just had Jeff Goodman of Foxsports.com on our radio show and had a wide-ranging interview on the Eric Bledsoe and Enes Kanter situations. Goodman went into detail on what criticisms he has of the media coverage of Bledsoe and mentioned that he believes similar stories could be written about "17 of the top 25 schools in America." He then talked about Kanter and said that while he believes Kanter will end up not being cleared to play, "there is a definite chance that they (the Turkish documents) were falisified." The interview will be up on the podcast site within the hour and is definitely worth a listen as Goodman goes as close as any national writer will get to (a) recognizing the problems with the Eric Bledsoe coverage and (b) predicting what will happen with Enes Kanter.