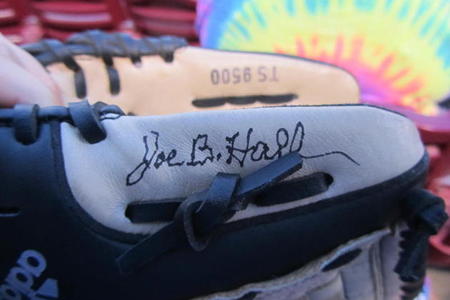 It is a part of UK lore and for many old-time UK fans, the main reason they hate Bobby Knight. During a game in 1974, Bobby Knight “slapped” Joe B Hall on the back of the head during a game. Depending on who you ask, it was either a playful pat or an egregious act of a complete jerk. The truth is often debated, but in this excerpt from a 2006 biography of Knight, Joe B Hall tells his side of the story:

“The situation was, he was yelling at the officials from in front of my bench, in front of me”, Hall says. “And as he turned to go back to the bench, I said, ‘Way to go, Bob, give ‘em hell.’ Good-naturedly, because this was a friend of mine.”

“And he turned and broke down, almost like an attack position, and he screamed at me, ‘Don’t ever talk to me during a game! Why don’t you coach your own motherf***ing team!’”

“And his facial expression was — what do I want to say? — distorted in anger so that I felt moved to do something. So, I followed him up and I said, ‘Hey, Bob, I didn’t mean anything by that. You know I hope you’re not upset by what I said, because I didn’t mean anything personal to you. You’ve kicked our butts soundly; you’ve got a great team.’”

“And I turned to walk away and he popped me with an open hand at the back of the neck. Pretty strongly. And I turned in response, and he again broke down in attack mode and he said, ‘I didn’t mean anything by that, either.’”

Knight insists that the tap was playful, but at the time Hall clearly disagreed. The issue still divides both fan bases, but one thing seems clear to me. Knight is, and was, a Grade A jerk…and if Hall, one of the nicest men I have ever known, was offended at the time, then I am on #TeamJoeB.

Thoughts and notes as KSR makes its way to the Bahamas

At a time in which sports are at their lowest point of the year -- no disrespect to baseball, but it is what it is -- Kentucky basketball is here to save the day. A four-game exhibition trip for the Wildcats in August, nothing better to get us to...

Last year, Jensen Castle made history at the U.S. Women's Amateur, coming in as the No. 63 seed and winning the whole thing, a first for the Kentucky Women's Golf Team. Heading into day two of this year's event, held at Chambers Bay in Washington,...

Saturday's open practice was not a good one for Rich Scangarello's first offense at Kentucky. The Wildcats threw multiple interceptions and seemed to come up on the short end of the stick in all drills against the defense. Scangarello has seen his...

LOOK: Kentucky Wildcats already having fun in the Bahamas

Yesterday, the Kentucky Basketball team arrived in the Bahamas for its four-game exhibition tour, which tips off tomorrow night. Today at 2 p.m., the Cats will hold an open practice for fans and media at the Baha Mar resort. Hopefully, Jack Pilgrim...

Carleton loses to Florida State, Northeastern ahead of Bahamas trip

Canadian basketball powerhouse Carleton is supposed to be Kentucky's biggest competition in the Bahamas. Turns out the Ravens may be in rebuilding mode. Carleton lost both of its games vs. NCAA Division I opponents in the Can-Am Shootout this...

Before the show sends Ryan Lemond off to the cornfields of Iowa for the Field of Dreams game, he has two more hours of Kentucky Sports Radio this week to enlighten KSR's audience. He's with Matt Jones and Shannon The Dude to preview the Bahamas and...

KSR Today: The Big Ten is Stealing the SEC on CBS

DUUUU-dun-dun-dunnnnnnn! Dun-dun-dun-Dun! The beautiful chorus accompanying the best of SEC Football will soon now be the din that introduces dozens of Purdue punts and Nebraska turnovers on CBS. Just when you thought conference realignment couldn't...

Position unit breakdown: All you need to know about the top offensive backfields in 2022