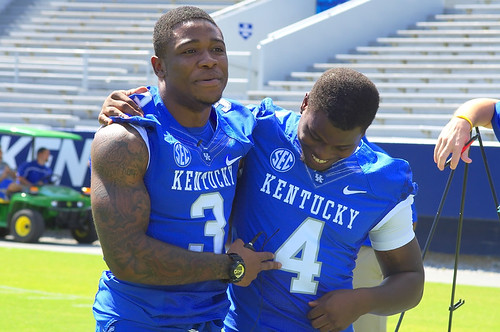 Kemp and Raymond Sanders[/caption] JoJo Kemp is the new kid in the backfield, but he was the star of the group in Saturday's win over Miami. The freshman running back led the team with 81 yards on 12 carries, doubling starter Raymond Sanders' six carries and 39 yards. After the game, Kemp told us he knew he would get his opportunity to shine, he just had to wait it out. "I waited for my turn," he said. "And when it came, I knew I had to make it count." Kemp will likely see his touches increase next week when Louisville comes to town, although he admitted that he hadn't heard of the Louisville Cardinals until he arrived in Lexington. It didn't take long for him to grasp the meaning of the rivalry once he got here, though. Now he knows all about it.